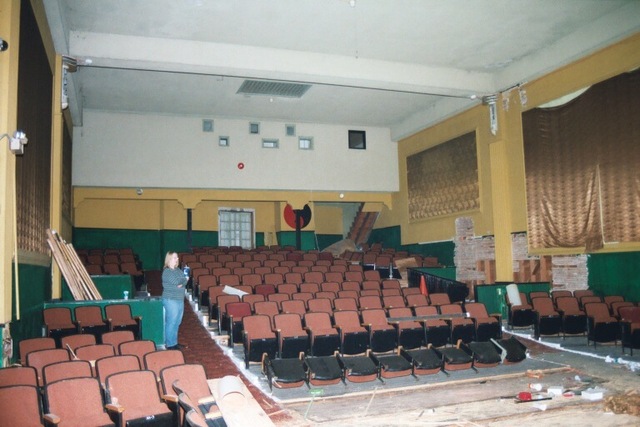 The Oak Harbor Theater opened in 1920. Later renamed Old Town Cinema it operated until 1985. Nice Art Deco interior, but it became partly gutted and has since been demolished.

Nice old single screen theater. I sure wish someone would reopen it.

From the 12 Apr 06 edition of the Whidbey News-Times; current owner is identified but she had no comment, also no word on what her renovation plans involved.

By Nathan Whalen
Apr 12 2006
The future of an 85-year-old theater building is unknown after sustaining damage from a fire.

A fire broke out early Monday morning at an empty movie theater on Pioneer Way in downtown Oak Harbor. The theater, which has been vacant for years, was undergoing renovations.

The blaze started sometime early Monday morning in the auditorium of the abandoned theater.

Ray Merrill, battalion chief for the Oak Harbor Fire Department, said the fire was slow moving. The fire had burned for several hours before smoke started billowing out of the building.

He said several city workers called in the fire at approximately 7:15 a.m. when they noticed the smoke.

They werenâ€™t the only ones who noticed the fire.
â€œSmoke was coming out of the tiles,â€ said Tyler Deyo, a management trainee at Enterprise Rent-A-Car, describing the smoke pouring out of the side of the building.

Rick and Cheryl Rennebohm noticed the smoke from their home across the harbor on Scenic Heights Road. Since they owned the adjacent building, they came to see if their property was OK.

Firefighters extinguished the blaze in about 20 minutes.

Merrill described the damage as extensive. The fire burned the support beams under the building. He didnâ€™t say the building was a total loss, but it would take a lot of money to fix it.

Even though Merrill knew where it started, he couldnâ€™t say what caused the fire. That is still under investigation. Officials are tracking down and talking to people who were in the building before the fire started.

In addition to firefighters from the Oak Harbor Fire Department, North Whidbey Fire and Rescue and NAS Whidbey also responded.

The buildingâ€™s owner, Kristi Jensen, would not comment on the incident.

The theater, which was built in 1920, originally looked different than the plain yellow, metal front that is seen today.

When it opened in July 1920, the front of the theater featured a castle-like facade. It was built by Howard and Bessie Maylor, according to Peggy Darst, a local historian and writer who recently produced a book documenting a pictorial history of the area.

The theater originally featured silent movies complete with a live organ player who accompanied shows back when the theater was known as â€œThe Oaks,â€ Darst said.

By the time Darst started watching movies when she was little, Bob Tull ran the theater.

It isnâ€™t clear when the theater shut down or how long it has been vacant. Some people have said the building has been vacant for 12 to 15 years and, at one time, it was a record store.

She’s down! From the 13 Oct 07 edition of the Whidbey News-Times:

From a sultry Kim Novak floating unconscious in the icy waters of San Francisco Bay, to a sinewy Charlton Heston overacting as he battles highly-evolved apes, the spirits of celluloid persona have become fixtures in the old Whidbey Cinema building over the last three-quarters of a century.

The ghosts will now will have to either relocate or learn to adapt to modernity.

Abatement and demolition crews from Everett set up camp outside the Pioneer Way structure Thursday morning. By mid-afternoon, the building was fully razed and the wooden entrails were being loaded into a steel container for transport. Owner Kristi Jensen reportedly plans to have a mixed-use building constructed on the site.

The building, which has been vacant for years, was severely hobbled last April when an early morning fire went unobserved for hours and scorched the building. Extensive damage, including burnt support beams under the structure, did not total out the building, but Ray Merrill, Oak Harbor Fire Department battalion chief, said at the time renovation would be an expensive undertaking.

The future of the longtime theater remained a looming question mark until Thursday. Although details of Jensenâ€™s new building were not available, the demolition made it clear that her plans did not include using the existing structure.

Howard and Bessie Maylor built the theater in 1929, according to county recordings. Memories of the Maylor years, when sound made its debut in what was then called the Oak Theater, are sketchy.

â€œMy dad used to take me there when I was 8 or 9 years old. Howard and Bessie also had a grocery store,â€ said Wes Maylor, whose grandfather was Howardâ€™s brother.

The theaterâ€™s heyday appears to have come in the 1970s when newly-retired Navy Cmdr. Robert Tull and his wife Anna purchased the idle business and turned it into a family â€" and community â€" affair.

With nine children, eight of whom graduated from college, Tull used the theater to keep track of his progeny and help them build savings accounts.

â€œMost of my brothers and sisters worked there for some length of time,â€ said Patty Cohick, the oldest sibling. â€œMy mom sold tickets and my dad greeted everyone.â€

The busy couple also ran a realty company and a motel.

A significant facelift and a new name resurrected the theater. Other than the Navy movie house, Whidbey Cinema was the only show in town.

â€œWe had double reels that had to be changed manually,â€ Cohick said. â€œIt was really kind of the end of an era.â€

Chuck Tull would make the trek from the University of Washington on weekends to work at the theater. The â€œend of the eraâ€ referred to by his sister resonated with the Gonzaga Law School graduate. He remembers his late father cultivating a moviegoing experience that melded social interaction with cinema magic.

â€œIt was almost a throwback to an even older era,â€ Tull said.

It was not uncommon to find sailors purchasing tickets that they barely used, instead choosing to chew the fat with Robert and Anna in the lobby.

â€œThey loved to talk to people,â€ he said. â€œIt was much more than just the flicks, it was a piece of home. Being retired military and having moved around a lot, my parents were certainly empathetic to the plight of the 18- to 22-year-olds. They had a mom and dad they could talk to, if only for a few hours.â€

Saturday matinees translated to free daycare, Tull said with a laugh. Robert would introduce the movie, lay down the ground rules and turn the kids loose.

â€œThe kids used to line up around the block for matinees,â€ Cohick added.

Both Tull and his sister remember their father raffling off a pony. Each child purchasing a ticket to the matinee would be entered in the drawing.

â€œMy family had the pony and I think my dad just wanted to get rid of it,â€ Tull said. â€œOne of my sisters would ride the pony down and the kids would sit on it. I think the first family that won the pony gave it back and we raffled it again.â€

According to county records, the Pioneer Way building changed hands between 10 and 15 times during its long Oak Harbor history. And its business uses have been every color of the rainbow.

â€œIn high school I remember it showed X-rated movies for a few months,â€ Tull said. A music store was also said to occupy the space for a short time.

Whidbey Cinema continues to live on in the memories of residents who spent lazy Saturday afternoons at the theater watching Lee Marvin take an unlikely turn as a singing gold prospector.

â€œIt was a hometown icon, much more than just a theater,â€ Tull said.

This sucks. This was a nice theater too.

In the late 80’s it was known as Babylon Records. They had all age alternative shows on the weekends, and sold records, tapes and cd’s during the week. I worked as security for the shows on the weekends. I still have a seat from the theater. We took out the first few rows to make room for a stage expansion and a “mosh pit”. As a child, I attended the matinees. I would always hope to win the large popcorn tub full of candy that Cdr. Tull would raffle off before the film started. Afterwords, groups of us kids would re-enact the movies under the oaks of Smith Park, located behind the theater.

So many folks have fond memories in that old building, I was a South Whidbey kid, and only saw a handful of films here, it was always a treat, someones birthday or such, what a shame it’s just a memory now.

Should be listed as demolished.

I grew up with this theater in the 70’s!!!! Many, many fond memories! Original Star War release, sneaking in under age to see Goldie Hawn in Pvt. Benjamin, China Syndrome, Coma, Meeting friends in line on the corner, the park in back, the concession/popcorn, getting carded for R rated movies, the matinees, Flash Gordon, raffles, meeting first girlfriends there.. Goodtimes by everyone…

I lived in Oak Harbor for three years. I saw my first movie in the Old Town Cinema, it was the 1976 remake of “King Kong.”

I went to visit Oak Harbor in 1986 and found the theater was closed. I was kind of sad to see those for sale or rent signs.

Then in October 2007, I came for a visit again and found that the Theater building no longer exists! Talking to folks around town, they told me they just demolished the theater just a few days or weeks ago.

Though I only saw one flick in that theater, it was a memory of a landmark from my childhood.

This theater, known as the Whidbey Cinema at the time, was my first projectionist job in a movie theater. I was still in high school at the time. After nearly 40 years, I am still employed in the business and have many fond memories of the Tull’s and their theater. It was a well run family business and they treated their employees like family.