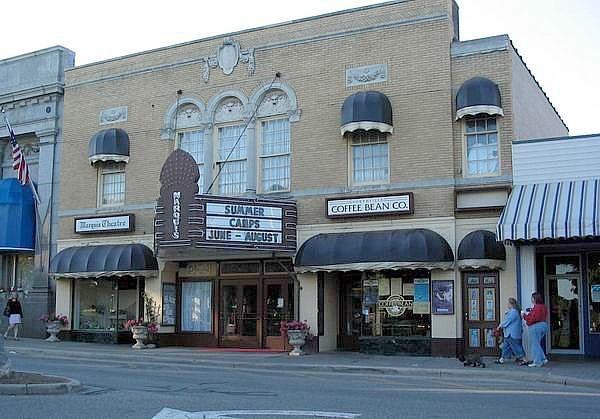 The Penniman-Allen Theatre, or P & A Theatre, opened in 1925, built for Kate Penniman-Allen, who also constructed the theatre of the same name in Plymouth. The Renaissance-Revival-style theatre cost over $150,000 and it featured a $13,000 Wurlitzer pipe organ. The P & A also had a stage, orchestra pit, and dressing rooms. The theatre originally was originally a vaudeville/movie house. Charlie Chaplin and Mary Pickford appeared in person during the P & A’s early years. The Wurlitzer organ was removed in the early-1950’s.

After Kate Penniman-Allen sold the theatre to Edward Hohler, the theatre was acquired in 1971 by the Zayti family. In 1972, the theatre’s name was changed to the Marquis. A restoration starting in 1978 brought the old theatre back to its former splendour. The Marquis moved from movies to live entertainment, going full circle to the theatre’s earliest days as an opera house. In addition to opera acts, the Marquis hosts various other live performances, including children’s theatre, concerts, and musicals.

A fire at the theatre in 2003 caused some minor damage, mainly from smoke, but this has since been repaired, including new seating and curtains. It was closed in March 2021.

The P&A (as originally built) had a Wurlitzer theater pipe organ built in North Tonawanda, New York (USA), their opus #1205, not Germany as written above. The theatre was not built as an Opera house, it was a common, run of the mill Movie/Vaudeville house very common in the pre-talking picture days. The Wurlitzer was bought and removed in the early 50s by Jack Domer, parts of it are still playing
in a local (Detroit area) home installation. The console is currently for sale by the Detroit Theatre Organ Society, although it has been extensively modified to be a three manual console of unusually ugly proportions and appearance.

Mr. Lautner is correct, the P&A was built as a movie house (there was once an opera house in Northville as well, but was torn down in the late 50s). I worked in this theater in the early 70s as an usher, when the theater, tho' in only fair shape, still had some of it’s original interior details. To say that the P&A was restored is, in my opinion, incorrect. What the restorers did was to try to make a 20s Renaissance Revival theater Victorian (which, being built in 1925, it never was), and in the process obliterated many of the original 20s details, the gilt stenciled proscenium in particular (it had survived by being covered by a wide screen installed in the 50s or 60s), which they painted over. Also lost were the asbestos curtain and silent movie screen. They added stained stained glass windows where none had existed, and destroyed half of the first and second lobbies to increase the adjoining retail space. Though I’m sure intentions were good and well meant, the interior work you see today is incorrect for the P&A’s original period.

The theatre is permanently closed. It has a new owner and all the interior furnishings are being sold off. Looks like a gut rehab with no plans to do any kind of theatre activities. Check out the website link for info.