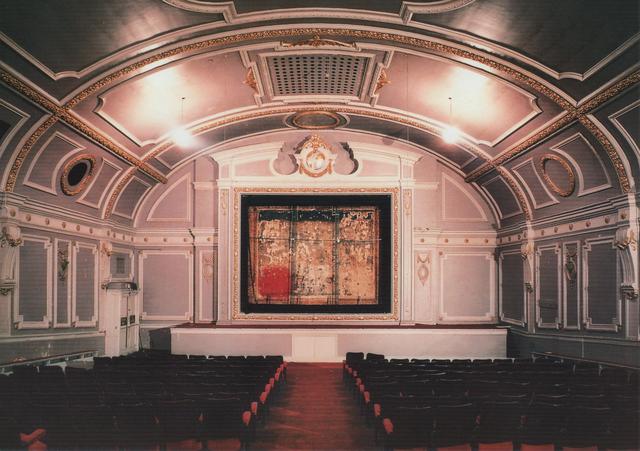 Located in the west London inner city district of Notting Hill. Opened on 24th December 1910 as the Electric Cinema Theatre, this was one of the first buildings in the country to be built for and designed specifically for motion picture exhibition. The small 600-seat (all on one level) cinema was soon dwarfed by the palaces of the 1930’s, but remained open (on and off) until the 1990’s.

In 2001, the Electric Cinema was restored and re-opened after a £2 million facelift. A local resident, Peter Simon, funded the restoration, upgrading the sound and the screen. Seating is now provided in 98 luxurious leather armchairs with adjacent tables and plenty of leg-room and 2 two-seater leather sofas at the rear.

The Electric Cinema was re-opened and is operated by Cityscreen, a small cinema chain that exhibits mostly independent and art house films. It was closed ‘temporarily’ in June 2012, due to smoke damage from a fire in the adjoining restaurant. It re-opened late-November 2012, totally refurbished and equipped with digital 3D projection. It now also has six double sofa beds in the front row.

It is a Grade II* Listed building.

Exterior photo and some history on the Electric Cinema here:
http://www.tnunn.f2s.com/electric.htm

In my student days in the late 1970’s and early 1980’s I used to frequent the electric cinema when it was a cinema club (a means of circumventing some of the licensing requirements). Inside it was a bit of a small screen flea pit, but it had a magical charm of its own and generally an audience of film lovers. There were midweek late night double bills starting at 11:15 pm and finishing at 3-4:00 am. I believe that the regulars such as myself were known by the staff as â€œCharliesâ€ !

There was a little hatch at the rear of the cinema where one could buy fresh coffee, the odour of which wafted across the auditorium. Homemade cold pizza and carrot cake were also available.

Some of my magical memories of cinema were watching the Buster Keaton season with live piano accompaniment and a full house of belly laughing people. It must have been similar 60 years earlier. Another fond memory was of watching Murnauâ€™s silent Nosferatu with Brian Enoâ€™s Music for Films (an album used frequently at the Electric in the intervals) as the backing music then followed by Herzogâ€™s version in German. Where could you see that sort of programme today? â€" but then again who would want to watch it?….. Somewhere I still have an old programme, a badge and a photo of the stylized neon sign â€" if I find them I will try to post them on the site.

A few years ago the cinema reopened as a den of luxury after a long period of closure. The programming while more interesting than most cinemas is less adventurous than in the 70â€™s/80â€™s, but we do have to live in the real (commercial) world!

A sunny day in London? I thought they didn’t have any.

correction to the main entry, the cinema is run by the Soho House group and programmed by City Screen

I worked here tearing tickets back in the day when the Electric showed 4 films a day…the main double bill with a matinee/late night double bill. Incredible! I got such an education in world cinema.

I’ll post some pictures from those days shortly, once I’ve got the permission of everyone who are in them.

In the meantime time check out this link to a brochure which was put together for the 100th anniversary by Mandy Kean of the Soho House Group in 2011. It’s featured on the Electric’s official web site…..

I think this theatre might have the Guinness World record for the World’s oldest cinema with most of the original fabric intact?

Happy memories from the mid 70s of being an Electric Cinema Club member and seeing some amazing movies not available in mainstream cinemas, in that faded and jaded, but utterly charming old Electric auditorium. The Electric and the Gate along with the Paris Pullman between Old Brompton Rd and Fulham Rd were my regular haunts and refuge for a number of years.