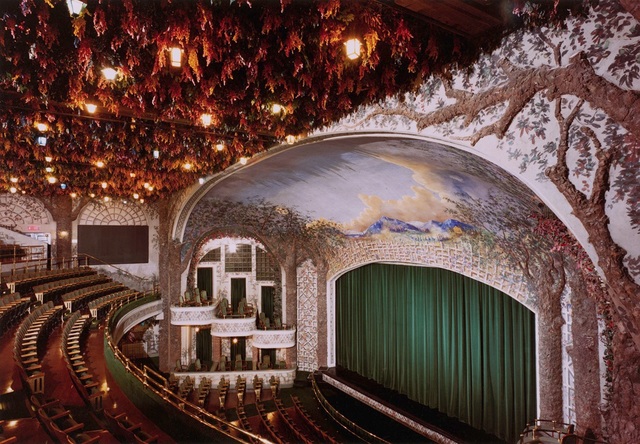 The Elgin Theatre opened on December 15, 1913 as Loew’s Yong Street Theatre and was used for vaudeville and movies. The interior decoration in a Beaux Arts/French Renaissance style were by theatre interior decorator Harold Rambusch. In 1918 it was equipped with a Canadian manufactured Warren 2 manual 10 ranks organ. On May 4, in the basement under the stage. 1928 the organ was destroyed by a fire which had started in an overheated blower. It was replaced by a Wurlitzer 3 manual 13 ranks organ in June 1928. The theatre was remodeled in April 1929 for sound movies.

The Winter Garden Theater opened on February 16, 1914 with vaudeville and movies. In 1919 it was equipped with a Canadian manufactured Warren 3 manual 12 ranks theatre pipe organ which was opened by organist Horace Lapp. It was closed on June 16, 1928 and was mothballed.

In 1958 the Wurlitzer organ in the Elgin Theatre was removed from the building to a barn in Picton, ON. The theatres were restored and reopened on December 15, 1989, 76 years to the day of their original opening on December 15, 1913. One theatre has 1,563 seats, while the other has 981.

Both the Elgin and Winter Garden have projectors installed by Christie every September for the Toronto Film Festival. It’s a fairly major venue for the TIFF.

MarkNYLA no full time projectors in either theatre? The Elgin was once a movie theatre.

Please to update the information in the bio.

Tours are now only being offered on Monday Evenings at 5pm.

and please fix the spelling of theatre.

It’s interesting that so many sources, including Google Maps, spell it theater. The website has “theatre” so it must be so.

There’s a few words in Canada spelt ending in ’re' instead of ‘er’ , such as Centre, Theatre , even defence. Plus they use the metric system to measure. Gas is sold in litres (oops there that is again) instead of gallons.

On behalf of the country, in particularly the province of Ontario, I humbly apologize if the difference causes you angst.

perhaps you need to focus on the differences between we and be.

Im aware you were replying to me - but thank you?

Once again I humbly apologize that my updating a telephone number and bringing up a spelling change (no, it wasn’t er vs re) could cause such distress. It was not at all my intention, merely provide information so that those who should visit Toronto can take this incredibly informative tour.

I don’t view them as being personal, except in the fact that insist of remind everyone that I’m being replied to.

(I think they are aware)

I provided some corrections and you chose to take them out of context and leave a snarky response.

I apologized if the different spellings of words that goes on all over the globe offended you. Again, more snark.

Then I apologized again.