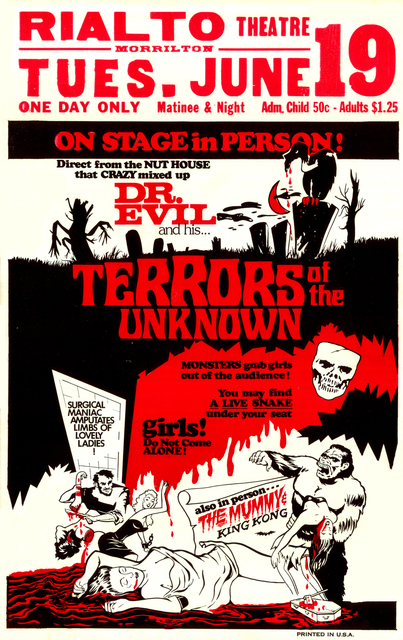 The Rialto Theatre opened in 1911, and was operated by Guy Vail. It had several owners over the years, including Arkansas Amusements. In the 1930’s or 1940’s, when it was acquired by Malco Theatres, it received an Art Moderne remodel. This included its large and ornate marquee, with the theater’s name in large letters on each side of the triangular marquee, and the front panel in gold and rose colored stripes, the stylized, intertwined letters M and T inside a circle. A further remodel was carried out in 1952, to the plans of architect E.F. Bruggeman, and seating was provided for 670. The re-opening movie was Kathryn Grayson in “Lovely To Look At”

The final operator as a single screen was United Artists who converted it into a triple screen and operated it until closure in 1987.

In 1997, the Rialto Community Arts Center was formed and with assistance from the Conway County Arts Council, the theatre went through a complete renovation in 2000. Now in use as a peforming arts venue, with live stage shows, musical acts, concerts and movies.

Small color photo on this link (don’t try to expand without a password:
View link

The Film Daily yearbook, 1943 has the seating capacity given as 475. It was operated by Paramount Pictures Inc. through the subsidiary M.A. Lightman.

The Rialto Community Arts Center has developed a new website at http://www.rialtoartscenter.com More pictures will be coming soon.

Here is a wikipedia entry:
http://tinyurl.com/32j7vr

November 2007 of the Rialto at night.

Here is another photo:
http://tinyurl.com/m4lhtz

8 Years Later After 1952’s Reopening, It Also Reopened Yet Again In 1960. I’ve Seen A Snipe On YouTube About A Grand Reopening Of The Rialto Theatre From The Same Year.