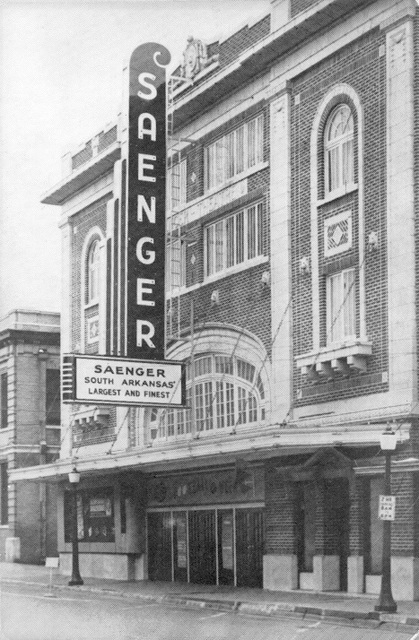 Built on the site of the Alice Theatre which was destroyed by fire on April 3, 1922. The Saenger Theatre in Hope (which is the birthplace of former President Bill Clinton) was opened on September 25, 1927 with Billie Dove in “The Stolen Bride”. It was later part of the Malco Theatres chain. It suffered a fire on Easter Sunday 1944.

It was rebuilt in 1948 to the plans of architectural firm Brueggeman, Swaim and Allen, reopening on January 7, 1948 with Bob Hope in “Where There’s Life”.

It has long since closed.

Closed? And it’s President Clinton’s hometown…give us ‘hope’ for that theatre! It seems there were many theatres with the name Saenger throughout the Gulf Coast region.

The original Saenger Theatre in Hope burned on Easter Sunday, 1944. Malco Theatres, the operator, didn’t get government permission to rebuild until 1947. The January 17, 1948, issue of Boxoffice announced that the new Saenger had opened. As rebuilt, the house had 900 seats.

Back on November 6, 1926, an item in The Reel Journal said that the Saenger Amusement company was planning to build a $150,000 theater on the site of the Alice Theatre in Hope. The new theater was probably the Saenger. It was being designed by architects Witt, Seibert & Halsey. A December 4 Reel Journal item said that starting on December 15 construction bids would be taken for the new Saenger house to be built on the site of the old Alice Theatre on Second Street.

Judging from the vintage photos (the one on our photo page which shows the theater next to an alley and the one at the bottom of page 58 of this book,) the Saenger Theatre was on the south side of West Second Street, just past the middle of the second block west of Main Street. Google’s street view displays the address 237 W. 2nd St. at this location, though that probably wasn’t the theater’s actual address.

Page 94 of the book has photos of the Saenger both before and after the 194 fire and 1947 rebuild. The caption suggests that part of the Alice Theatre’s facade might have survived in the Saengers. The Alice was opened in early October, 1921, and was destroyed by a fire in April, 1922.

The Saenger Theatre opened September 25, 1927 with the film, “Stolen Brides.” That building burned down on Easter Sunday 1944 only the outer walls remaining intact. Due to WW2 shortages, a replacement theater was delayed until well after the War. This new streamlined version of the previous Saenger opened January 7, 1948 with Bob Hope starring in, “Where There’s Life.” The original 34.5' by 15' vertical sign was salvaged from the old theatre and rewired in neon for the new Saenger.