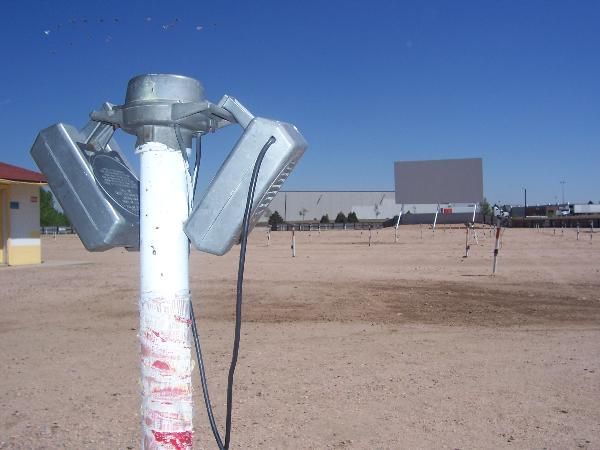 A single screen drive-in with a 500 car capacity. Opened on August 12, 1971, it operates seven nights seasonally from Memorial Day through Labor Day. It plays double feature first run fare. It has both traditional speakers and FM audio. 12 and up are $9.00 under 12 are free.

This the last drive-in in the greater Denver area; here is a article about the theater and the family that runs it: View link

Wow, sorry to read this! I’ve just moved to the area and was wanting to take the family to a Drive In Theater again. I worked in one as a kid, and customer service from figuring snack bar prices up in your head, counting chance back correctly, policing the lot for two hours before, during and after the show, as well as making sure the restrooms were clean and stocked ALL NIGHT was just part of the job. I am still going to check this theater out, and if not satisfactory, will make a detailed comment to the manager, as well as post the comment and response here. These theaters are quickly vanishing. They need to be run well to survive!

Went to the 88th drive in last night to see a triple feature..! Still Showing film, no digital. Drive-in clean with a very friendly staff. I will return.

Digital projection (a BARCO DP4K-32B) was installed on April 14th, 2015 and ran its inaugural digital program on opening night for the 2015 season on Friday, April 24th, 2015 showing a triple feature of “Home”, “Furious 7” and “The Longest Ride”. The conversion was handled by Strong of Omaha. The majority of the left 35mm projector (two projector booth) was removed to make way for the digital and moved down for use as a display in the snackbar. The projector head/soundhead from the retired left unit was put into storage in the booth as a parts unit and an (identical) Simplex XL projector head/soundhead from The Cinderella Twin Drive-In Theatre-Englewood,Colorado (formerly kept in the booth for parts) was mounted on the lobby display base/lamphouse. The remaining right projector was completely refurbished by longtime Colorado theatre tech Jimmy Seay and integrated with the new sound system and automation for screenings of classics or any other 35mm material possible making the theatre both 35mm and digital compatible. The 35mm equipment is Simplex XL projector head & Simplex sound head, Strong X-60 C lamphouse, Strong rectifier, Centry base and SPECO LO-270 platters. The left machine (that was removed) was identical.

Outstanding Anthony! Updating is a good thing. Keeps efficiency up, long run costs will be lower afterwords. I look forward to checking into this!!! Come to find out, my office is not far away, so the occasional Saturday night will be the thing to do this summer! See you at the movies!

That Denver Post story linked by CSWalczak said the 88 was built in 1972. “Bill and Margaret Holshue bought the 88 in 1976. The previous owner ran X-rated features”. Which means that someone built a drive-in from scratch just to run adult films? That seems unlikely in retrospect.

My most recent memory of the 88 is that the concession stand sold unbranded sodas from its fountain. Squeezing a penny or two by using cheaper syrup in an almost pure-profit item left a literal bad taste in my mouth. OTOH, they almost always show triple features and stay open for as many weeks as they can, so I’m grateful that they’re around.

NeonMichael. As I’m sure you well know, the concessions at all theaters, is where the profits are made, particularly with a Drive-in situation. People rarely consider going to watch vintage movies these days, with the exception of special events. This means that movie suppliers rent the theaters their products at higher percentages for “new” productions, and lower, or flat rates for older. If a theater, that provides services, such as clean restrooms, maintained speaker systems, updated sound, a clean and well maintained screen and lot are to survive, some budgets need to be followed. Hat’s off to the 88 for keeping the tradition alive for people to experience!

the east 88 drive-in opened on 8/12/71. i am currently putting together a series of books on the history of the denver area drive-ins and indoor theatres – including several booking histories. if anyone has any questions on the subject, please feel free to contact me at . i’ll be happy to share my research with you. see you at the movies ! – kenneth james mitchell

Thanks to a series of long articles from 1972-76, I’ve got a decent picture of the 88’s early, rocky, pre-Holshue years. This is a summary of what I read in Boxoffice:

As Kenneth James Mitchell mentioned, the “East 88th Avenue” opened in August 1971 after a neighborhood petition drive in support of a zoning variance helped it become possible. It was built by Paul Cory, who owned the Starlite Drive-In in Sterling among other theaters. That first season passed quietly, though reportedly unprofitably.

At the beginning of the 1972 season, the East 88th Avenue switched to X-rated movies. The previously supportive neighbors were very unhappy about the change. Motorists were distracted by the explicit events on-screen. So many children watched from the roof of the school across the street that the school district built a fence to keep the kids off. The drive-in asked the county for permission to build its own 30-foot fence, but was denied. The drive-in decided to erect poles to support a light screen to block the view, but the county objected, getting the courts to hold Cory in contempt until the poles came down. In November, Cory told the court that he’d sold the East 88th Street to Olympic Drive-In Theatres of St. Louis. The drive-in filed appeals, bought some car heaters, and settled in to wait out the winter.

On the afternoon of Feb. 11, 1973, a bomb went off in the concession stand, blowing a 12-inch hole in the wall and causing about $1500 damage. Earlier, some guy had assaulted manager Michael Middleton in a grocery store; the suspect was booked and released on bail.

In early March, a court issued an injunction to shut down the drive-in, but that failed because it used the wrong address. (8700 Rosemary instead of the accurate 8780 Rosemary) The East 88th Avenue reopened for the season, only to face an attempted blockade by neighbors' cars. Finally, later in the month, another court landed a successful injunction using a different tack, shutting down the drive-in until it had installed curbs, sidewalks and such as promised in its original zoning variance, to the satisfaction of the county. Which was not in the mood to be satisfied.

Somehow in May, the East 88th Avenue must have reached a settlement. The injunctions were waived as the owners promised to lay off the X-rated stuff. Projectionist Paul Rabe was installed as the new manager.

In April 1974, EMW Management of Houston sold the East 88th Avenue to Steve Eisner of Scottsdale AZ. The drive-in was listed for sale in the January 1976 classified ads, and that’s about when Bill Holshue, longtime manager of the Lake Shore Drive-In in Lakewood, came into the picture. The rest is much quieter history.

I’ve put together a booking history for the 88 drive-in, from 1971 up to 1978 so far, along with ads, photos and other information – in case anyone would like to know when a particular movie played there. I’m always happy to share my research with interested people. Take care – Ken Mitchell ()