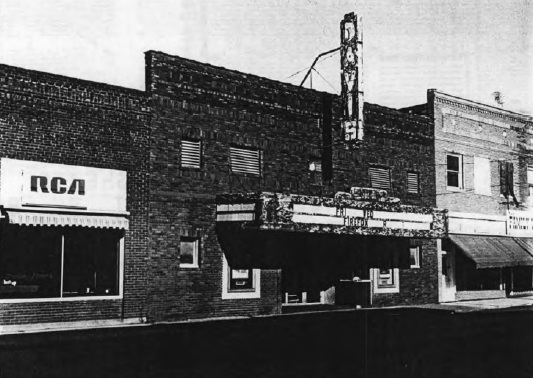 The Davis Theatre is located on S. Main Street at E. 20th Street in downtown Higginsville. It opened on April 17, 1934 with Lanny Ross in “Melody in Spring”. It had 750 seats. In around 1942 it was taken over by Commonwealth Amusements, and they continued to operate it until at least 1950.

Later converted into four screens, the two story front is in brick. It has a rectangular marquee with a nice sized upright in red neon. This is a well preserved theatre and ran first run attractions until it was closed on September 28, 2012 and remained closed in 2013. It had re-opened by August 2018.

I help Fran and George put in those 3 new screens. I first met them on a trip to Higginsville to see “Way Out West” there. At that time I helped George convert the main theater sound to stereo and put in surround sound. I still go there once in awhile but I work in Saint Joseph and it’s a long hike. These two people are the nicest people you could ever know. If you ever get there George would be glad to give you a nickle tour.

This theater can be seen in the TV show American Greed (s2 e15) from 2008. The owners lost some money in a car-buying scam.

Official website said that it closed down on September 28th, 2012.

Tp the drive-in you were asking about was the Starlight Drive-In.

An article from the Higginsville Advance: Higginsville Advance April 13, 1934 Vol. 55 No. 5 Restored concession area DAVIS THEATRE OPENS TUESDAY One of State’s Most Beautiful Theatres Opens Tuesday, April 17th in Higginsville Beginning next Tuesday night, April 17th, Higginsville citizens can boast of having one of the most beautiful theatres here of any town anywhere near this size in Missouri. The old Royal Theatre has passed into history, and next Tuesday night J.W. Davis, owner of the show will open his new “Davis” Theatre to the public. Civic clubs of the town, in an effort to show their appreciation to Mr. Davis, undertook to sell out the show the opening night at $1.00 per ticket. The merchants of the town subscribed tickets, and most of them have already been sold, everyone being anxious to attend. Tickets will not be on sale that night at the door, and everyone wishing to attend the opening night must secure their tickets ahead of time, through some merchant or from the committee in charge of arrangements. The interior of the building is highly pleasing in appearance. The walls and ceiling are of celotex, which has been grooved into squares and triangles, with colored rectangles at intervals making a most pleasing design. The side walls are set with panels of colored celotex and red velvet. A baseboard of stained and varnished panelboard extends several feet up from the floor around the entire room. The room is well lighted with new ornamental lights from the ceiling, and while the pictures are being shown, the lighting is done by small colored ornamental side lights. The seating capacity of the new theatre is 750, and Mr. Davis purchased practically all new, leather upholstered seats for the room. They have been spaced further apart than most theatres, so that there will be plenty of leg room, and also, plenty of room for a person to pass into a row without everyone getting up. One of the best features is the gradual slope of the seats from the rear of the room to the front. The back half of the floor being raised into long steps, with a sloping isle. Every seat will have a full view of the screen. The screen itself is new, and much larger than the old one. The new sound screens, while presenting a solid appearance, are full of small holes, there being well over a million such holes in the new screen at the Davis Theatre. A large neon sign on the front of the building with the word “Davis,” two display panels, and the glass ticket cage at the entrance gives the show a real metropolitan appearance. Inside the entrance is a spacious foyer with a waiting room, ladies' and mens' toilets, and the manager’s private office leading off from both ends. There are two isles leading into the show room. A new picture “Melody In Spring” is the feature the opening night. The picture stars Lanny Ross, favorite over the over Janes on the “showboat” program and his radio fans will not be disappointed with his screen appearance. This is one of the best pictures produced this year, and has been procured by Mr. Davis at considerable expense in order to make the first night performance attractive. In addition, there will be a news reel, comedy, and several other short attractions. Short talks appropriate to the occasion will be made by Rev. John Lindsey and Mayor Huscher.

Once again, Chuck got a lot of things wrong on this listing. The front is not limestone, it’s brick, and always was. It’s painted (tan and brown), which never does brick any favors, but looks nothing like stone. Theater is not closed. It may have closed in 2012 (definitely closed in the 2013 streetview), but it was showing first runs when we passed through today. The upright is not blue, and even in the 2008 streetview it’s the same brown it is today.

New website is higginsvilledavis.com. Prices are pretty high for a small town, $9 for adults.

According to history on the website, the building was a livery stable, then a dealership, then a roller rink for one year (1933), then a theater.