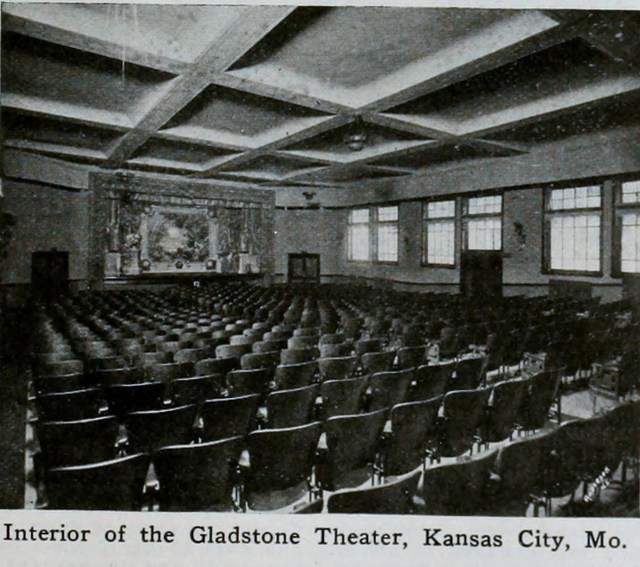 The Gladstone Theatre was originally called the Gladstone Hall. It was used for live performances and later went to movies. Located in the Gladstone neighborhood at St. John Road and N. Elmwood Avenue. It opened in 1913 and seated 602. It was equipped with a Kimball organ which was opened by organist Allen Bogen of the Auditorium Theatre, Chicago.

It was an impressive two story building in red brick. The front along the second story was lined with with seven windows with curved arches and Corinthian style columns between each. there was a terra-cotta trim all along the roof of the building. Closed as a theatre in the early-1950’s the building was still in great shape and housed a business until it was destroyed by a fire February 27, 2011.

I wasn’t able to come up with any businesses at 4608 St. John Road, not ones that advertise anyway. Except for some graffiti on the front, the building still looks impressive.

This is from Boxoffice magazine, May 1960:

KANSAS CITY-The Gladstone Theater, a Fox Midwest theater for a number of years, closed Saturday night, April 30. Located at 4608 St. John, the theater was built by the late John G. Hiatt and opened in 1919. In 1922 it was taken over by the old Capitol Enterprises and 1926 was acquired by Universal of New York.

With the termination of the lease, Fox Midwest is moving its equipment from the theater. The Zoglins said the building will be remodeled and made into business property. Jess Spain, manager of the Gladstone, also manages the Vista for Fox Midwest and will continue in that capacity.

Sadly, the old theater building was destroyed by fire yesterday, 27 February, 2011. Many childhood memories of this place spent with my family back in the 1940’s. You always hate to loose one of these grand old ladies.

Much of the interior equipment, seats, stage curtain, speakers and projectors were taken over to the Ritz on 12th Street. The Ritz got spruced up pretty nice but it did not take very long for teen goons to rip up all the seats with knives. They were very nice when first set up at the Ritz. The seats that were replaced actually were broght over from the Aladdin.

I have not been able to find any information on the St John theater just east of the Gladstone at 3608 St John. There were three or four theatres on St John back in the day. Only two are listed on this site. Anyone?