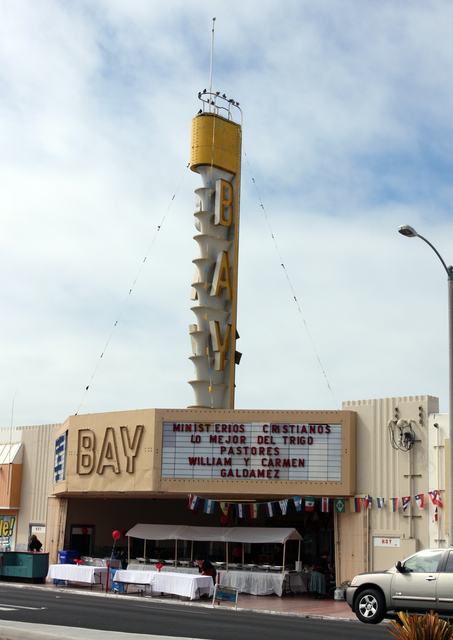 The Bay Theatre opened July 24, 1941 with Robert Taylor in “Billy the Kid” and Merle Oberon in “Affectionately Yours”. It was designed in Streamline Moderne style. This sleek and well-preserved former movie theatre became home to a church who vacated the building in 2008. The towering vertical sign with the word “Bay” in large yellow letters is quite striking. Sadly, on January 9, 2018 high winds brought the name sign down.

Advertised as a Spanish language theater in the LA Times on 3/15/81.

The church is no more. Building is vacant and for sale.

This ad shows a Pussycat Theater at 930 National City Boulevard in March 1975. I assume this is a different theater, although just the one house is listed in National City so far:
http://tinyurl.com/46phg5

An ad for the United States Air Conditioning Corporation in the May 17, 1941, issue of Boxoffice lists the Bay Theatre among the houses which had recently had the company’s equipment installed. There’s no indication whether the Bay was newly built or if it was an existing house merely getting new air conditioning equipment. In any case, there was apparently a Bay Theatre in National City before the 1944 opening date currently cited in the intro on this page.

The marquee and decorative tower on the Bay Theatre apparently date from 1951, as those particular features are mentioned in an item about an $80,000 remodeling of the house appearing in the April 21 issue of Boxoffice.

A third National City house was called the Star Theatre. The August 7, 1948, issue of Boxoffice said that the 500 seat house was nearing completion.

The March 25, 1950, issue of Boxoffice said that Harry Goldfarb operated three theaters at National City in conjunction with the Eastland circuit. The Star might not have been among them, though, as the November 20, 1948, issue of Boxoffice named the three theaters operated by the Eastland Circuit at National City as the Bay, the National, and the Vista. I think the Vista might have actually been in nearby Alta Vista, though. A 1938 Boxoffice item mentions a Vista Theatre operated by Harry Goldfarb, but places it in San Diego.

One more National City house was the Paradise Twin, opened on August 15, 1973, according to the August 27 issue of Boxoffice. Also, the September 18, 1972, issue of Boxoffice includes an unnamed 678-seat theater on Harbison Avenue in National City on a list of recent and current theater projects, but Boxoffice’s lists of this sort tend to contain a number of errors.

Here is the other theater in National City in 1983. We don’t know which one this is out of the theaters discussed above by Joe.
http://tinyurl.com/n6k4kj

A photo of the loge section of the recently remodeled Bay Theatre illustrated an ad for Heywood-Wakefield seats on this page of Boxoffice, April 5, 1952.

Here is a link to the news story.