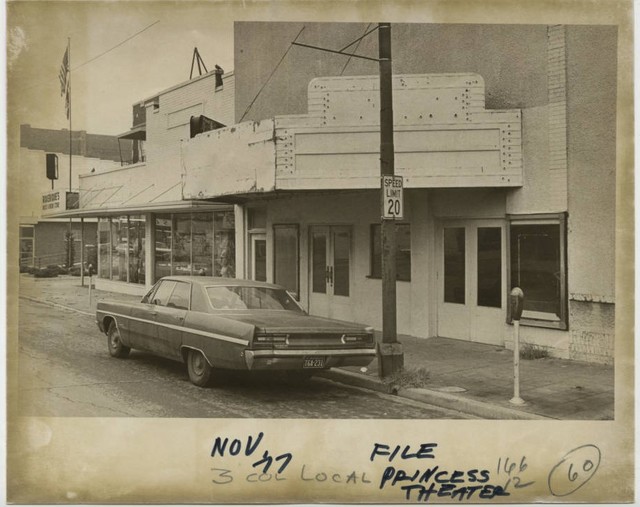 This downtown theatre started with silent movies and then moved on to the talkies. It opened as the Princess Theatre in 1917 (there was an earlier Princess Theatre in town which had opened in 1911). It was a second run double feature theatre. It was a small narrow theatre with a small screen. By 1943 it was operated by Fox Midwest Amusement Corp. Following renovations in reopened as the Kickapoo Theatre on October 5, 1944 with Paulette Goddard in “I Love a Soldier”. It was closed on November 30, 1956 with Simone Signoret in “Diabolique” & Alec Guinness in “The Captain’s Paradise”.

It briefly became the Four Star Theatre featuring country western music which operated for a year in 1958. It then became a roller skating rink. It was demolished in 1977.

The Princess theater was located on the north side of Commercial Street a block or so west of the footbridge over the railroad yards that is still there. I am a native of Springfield and the theater was open as long I remember in the 1930s and up until after World War II. It was a third-run theater, but after the war was remodeled, renamed the Kickapoo and showed first-run movies simultaneously with the Gillioz or Electric theaters in the central business district. I believe it was open all through the 1950s and was only closed after many theaters feel victim to TV.

A better address for the Princess/Kickapoo/4 Star is 307 E. Commercial.

The Princess operated in two locations, but if this web page is correct, neither was at the modern address 408 E. Commercial Street. The brief paragraph about the two Princesses appears to have been from an oral history (or perhaps was just awkwardly written, as the wording is a bit ambiguous), but it appears that the first Princess Theatre was at the second door east of Benton Avenue on the south side of Commercial Street, which would make its modern address 502 E. Commercial.

Reopened as Kickapoo on October 5th, 1944 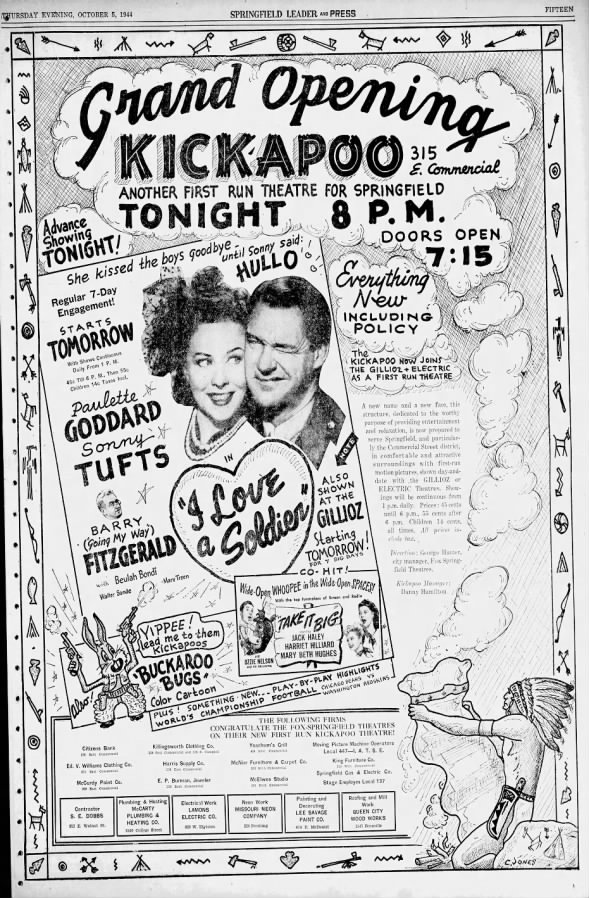 The second Princess/Kickapoo Theatre opened in 1917. I see that the 1944 Kickapoo grand opening ad rivest266 just posted gives the address as 315 E. Commercial Street. An October 13, 1956 Boxoffice item announcing the launch of an art movie series at the Kickapoo said that the house was operated by Fox Midwest Theatres.

Although the 1914-1915 American Motion Picture Directory lists the original Princess Theatre at 408 E. Commercial, the web page I cited in an earlier comment says that it was on the south side of Commercial two doors east of Benton Avenue, which puts it in the modern 500 E. block. Currently the second door east of Benton is occupied by Ruthie’s C Street Bar, at 504 E. Commercial. It is a very old building, and if the original Princess was there it is still standing.

Addresses in Springfield are very weird. In the middle of the block of Commercial between Booneville Avenue and Campbell Avenue the numbers instantly jump from the 200 E. block to the 300 W. block. I have no idea how to account for the three missing blocks. Perhaps they are the site of the Missouri branch of Hogwarts Academy.

In September of 1956, the Kickapoo experimented with art films giving out coffee in the lobby. That appears to have been the last shot for the Kickapoo which ceased operations on November 30, 1956 with a double feature of “Diabolique” and “Captain’s Paradise.” It had a brief run as the Four Star Arena with live country music and also as a roller skating rink.

The Princess actually opened in late 1916, not 1917. According to the December 30, 1916 issue of Moving Picture World, “[t]he new Princess Theater has been opened under the management of S. E. Wilhoit.”

The Princess Theater on Historic C-Street. Around 1916 the Princess moved across down the street and to the North side of Commercial St. The main building itself was at 313/15 E Commercial Street. Another building would come into play in later years that would become part of the Princess is the building at 307-09 E Commercial St. The building today is now 305 E Commercial Street and it has a lovey ghost sign on the side of the building that says Beeman’s Pepsin Gum. https://en.wikipedia.org/wiki/Beemans_gum The building at 305 E Commercial has it’s own history. It was built in 1883 by Henry H Kaufholz . He had his second grocery store there. Mr Kaufholz also has a great history to read click here and scroll to his name https://thelibrary.org/lochist/history/directory/NSpfd.html But today we are focusing on the Princess! In 1934 the theater acquired the building next door that we were just talking about, and so its address was now 309-11-13 E Commercial. After World War II The Princess was remodeled and in 1946 it was renamed the Kickapoo. The Kickapoo Theater lasted till 1957. The building set vacant till later in that year and it became Four Star Theater for one year. And it was vacant again in 1959. In 1977 most of the theater was raised and it is now part of the parking lot for the Historic C-Street farmers market. But the building that is now 305 E Commercial that was part of the three theaters would later become part of Roderique Music & Book store. Hamlin & Fertina Roderique started their store in 1951 at 301-03 E Commercial St. The expanded into 305 in the early 1960’s. The store was there till 1981.