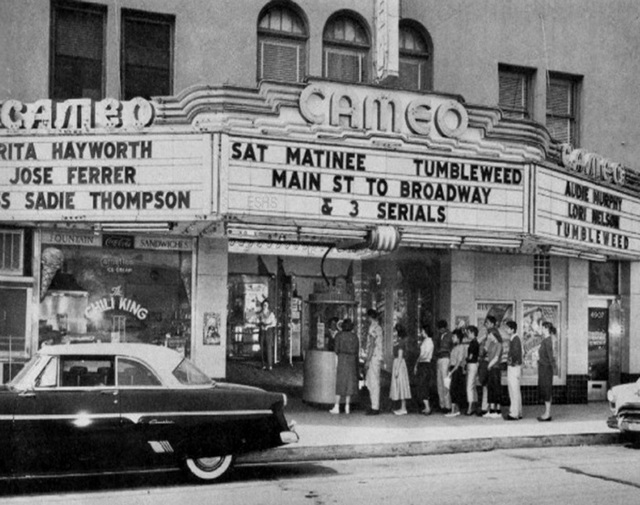 This neighborhood theater was in the El Sereno district of the City of Los Angeles. It opened in 1924. About 1970, when it began running Spanish language movies, the name was altered from Cameo to El Cameo, probably to distinguish it from the Cameo Theater on Broadway in downtown L.A. which was also showing Spanish language movies by that time. It housed a furniture company into the mid-2000’s, and by 2009 was in use as a discount store.

Thanks for that list. There are several there that I never knew Edwards owned. I’m especially surprised to see a theater in Beverly Hills, and the four in Los Angeles. I had thought that, before the company began expanding rapidly in Orange County in the 1960s, all their operations were in, or adjacent to, the San Gabriel Valley.

In that decade of the 1950s, I frequently attended eight of those theaters: the Alhambra, Coronet, Garfield, Tumbleweed, Garvey, Monterey, San Gabriel and the Temple, plus Alhambra’s El Rey, which Edwards acquired a few years later. Every single one of them is now gone, the majority of them lost to earthquakes. Neither time, nor California’s unstable geology, has been kind to the theaters of that area.

Southwest Builder & Contractor issue of January 4, 1924 announced the plans for the Cameo theatre. The architect was J.T. Payne. The project was expected to cost $35,000.

Function should be changed to retail.

Over on the Monterey Theatre page, ronp posted an excerpt from a 1990 interview with James Edwards, in which Edwards says that the Monterey, and not the Cameo, was his first theater. I’ve heard both theaters mentioned as his first by various people, but I guess I’ll take Jimmy’s word for it.

Here is another photo:
http://tinyurl.com/y4d58rl

great theatre i used to go there and watch a nite mare on elm street one and two.

This might be the theatre seen from the outside of the theatre in the music video “Lonely Boy”(Black Keys)?

My uncle ran that theatre for a while. I think it was about 1959-1961. I worked as a cashier. My mom opened a little Mexican café next door. Sundays were our real busy day with Cartoons, serials, previews and double features! Later on he showed Mexican movies, but only like 1 or 2 days a week. As you walked into the theatre seating, the first 5 rows were huge lounging chairs. The rest were regular seats. I never went upstairs except only once to see the projection room. The door outside the theatre led upstairs. I don’t know if it was living quarters or not. Down the street was a fire station and next door was a hamburger place I think was called Freddies Firehouse. Now that was a hamburger!!