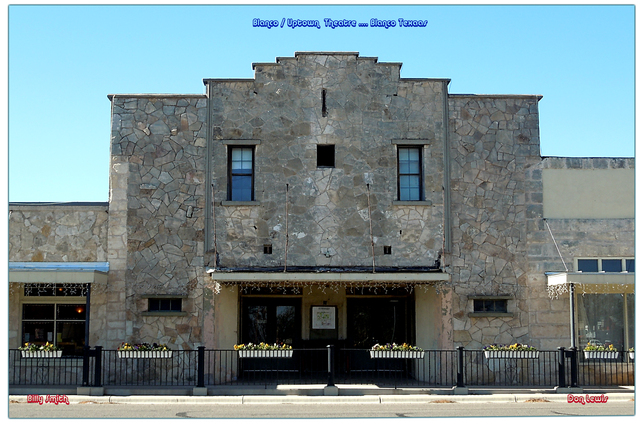 The old Blanco Theatre opened in 1936. The theatre has been closed since 1958. Up until 2003 the building had been used as a church.

A building permit was issued in May of 2003 to rehab the theatre. It doesn’t state for what purpose. It is going to take a great deal of time and money to complete the job from the shape the building is in.

I tried to locate the links you posted with a “Couple of old photos of the Blanco Theatre in Blanco, Texas.

Unfortunately, the links were no longer there. I would truly appreciate you contacting me as I am searching for old photos of the Blanco Theatre (currently under renovation and to be re-opened as a working theatre in 2007)

My father, W.D. Glasscock of Blanco and San Antonio, Texas was the original owner and builder of the Blanco Theatre. He built owned an operated theatres in many small South Texas towns in the 1930’s to 1960’s. These include the Stanley in Luling, the Leon in Pleasanton, the West in George West (also being renovated), the Dale in Stockdale and several others in Boerne and Mathis.

The theatre is about to be restored and become a working theatre again, but we need more old photos to help with the reconstruction project. BTW, the architecture of the Blanco theatre was done by Henry Zimmerman with the help of W.D. (William Donley) Glasscock. The theatre actually opened in 1937 and the Blanco Library archives have a copy of the newspaper article from the 7th of October, 1937 which has a front page article in regards to the opening of the Blanco Theatre. The inside page continuation of the article has a description of some of the construction features.

My dad was an old time headline performer in both Vaudeville and with Barnum & Bailey Circus prior to 1920. Thus his interest in theatres in later years after becoming a Texas oil industry pioneer from 1919 until his death in 1964.

Thanks for your help with any old photos you can provide,
S.W. Glasscock

Here is information on Glasscock Theatres from the 1963 motion picture almanac:

From Jan 2013 a photo of the old Blanco/Uptown Theatre building in Blanco.