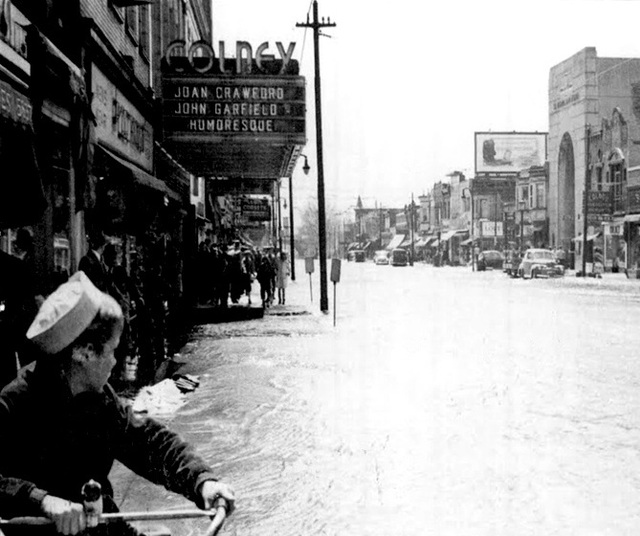 The Colney Theatre opened on April 11, 1925 with Douglas Fairbanks in “Thief of Bagdad”. It was designed by the firm of Hodgens & Hill. It stood on N. 5th Street near Olney Avenue adjacent to the Olney Theatre (which has its own page on Cinema Treasures). All seating was on a single floor. It was equipped with a 2 manual Wurlitzer organ. In the 1940’s it was operated by Warner Bros. Circuit Management.

The Colney Theatre closed on May 9, 1952 with Marlon Brando in “A Streetcar Named Desire”.

Looking at the view on Google, the building is still standing. It’s being used for a variety of retail businesses.

Built between 1924 and 1925, the Colney Theatre opened on Saturday, April 11, 1925 with 1,985 seats. This was two years before “The Jazz Singer” starring Al Jolson would signal the beginning of the era of “talking pictures.” Designed by the architectural firm of Hodgens & Hill, the theater included retail shops and was located near the Olney station of the Broad Street Subway. The marquee read COLNEY THEATRE across the front. The sides (or ends) supported the signboards and were topped off with COLNEY. The massive, illuminated roof sign, framed in chase lights, proclaimed COLNEY with two additional lines reading STANLEY and PHOTOPLAYS. The Colney had previously been operated by the Stanley-Warner Circuit Management Corp. before closing in 1958. Today, additional retail occupies the theater foyer/lobby. The marquee and roof sign are gone now and it is unknown for what purpose the auditorium serves today.

also in the photo section.

The Colney opened for the Stanley Circuit on April 11, 1925 and while “The Thief of Bagdad” enthused audiences, the theater’s Wurlitzer Hope Jones Style F Organ costing some $75,000 - more than the entire cost of some neighborhood theaters of the era - apparently was the show stealer.

The Italian Renaissance stylings of Hodgens & Hill also wowed the opening afternoon’s audience. The bathing of the interior in blue and gold at the ground level with monochromatic interior elsewhere including the white terra cotta front suggested class. Under Stanley / Stanley-Warner, independent operator Herbert Elliott of the Fern Rock was a thorn in the circuit’s side. After about eight lawsuits - Stanley Warner Circuit cooperatively operated the Colney with Elliott while providing fare and an arrangement with his independent Fern Rock.

Elliott would sell out the Fern Rock to Stanley-Warner, as well. The last advertised show at the Colney for Stanley-Warner was “A Streetcar Named Desire” on May 9, 1952. Said a distressed Marlon Brando, “Colney! Hey, Colney!” The building was then listed for sale ending its cinematic journey.