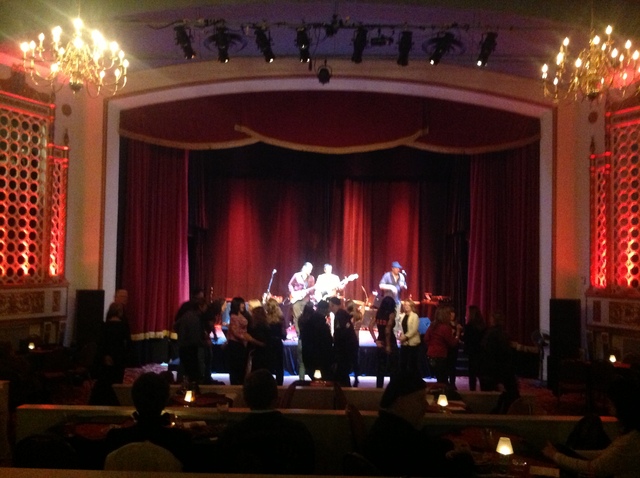 Opened in 1927, the Columbia Theatre was the region’s only Atmospheric style theatre. The lower part of the Columbia Theatre’s auditorium walls were decorated as a garden wall enlivened with grilled windows, hanging planters, wrought iron lanterns. Over these appeared landscape murals and above them a cloud-streaked twilight fading into a night sky with twinkling stars extending over the top of the auditorium to the opposite side. The ceiling beams were decorated with garlands of flowers.

At one time the Columbia Theatre had a pipe organ but this has long since dissappeared. The auditorium could seat 970 patrons in its original configuration - a continuous sloping floor or rake which extended nearly the entire length of the building - without the use of a balcony.

The facade of the Columbia Theatre had six pairs of attached spiral colums stretching from the sidewalk up to the finials above the parapet. Over each of the shops (that existed prior to renovations in the 1970’s) on either side of the entrance is an arched doorway with a small wrought-iron ‘Juliet’ balcony (these still exist). Large decorative panels with lozenge patterns grace the upper portion of the central bay. A panneled cornice caps the wall. Typical of the era, a vertical illuminated marquee supported by a large steel girder bore the name “Columbia” and was likely removed in the 1970’s. A horizontal canopy, supported by steel rods anchored to the wall, sheltered the enterance. The enterance conopy has changed but appears to be supported by the original steel rods. It is hoped that the original marquee canopy is hidden beneath the current marquee.

The Columbia Theatre originally offered its patrons “Vaudeville + Photoplay” - a combination of cinema, vaudeville and live music - this being the standard for the time. In 1976, Famous Players ‘twinned’ the Columbia Theatre by adding a second level and screen. The alterations concealed some Atmospheric qualities and many other architectural features. The lobby of the Columbia Theatre was completely renovated and the stores on either side of the entrance were removed at this time. Much of the original fixtures and tiles removed during this renovation were dumped in the crawl space beneath the theatre - leaving us with examples of what was originally used in the original lobby. The movie theatre closed in the mid-1980’s. The Fraternal Order of Eagles bought the building in 1987. The lower cinema became a banquet hall, with catering facilities installed in the backstage area and fly tower and; the upper cinema was converted into a lounge.

The Raymond Burr Performing Arts Society was formed with the intention to renovate and restore the Columbia Theatre to its original splendor; for use as a regional performing arts centre. Its name honors a celebrated local and world famous actor who was born and buried in New Westminster, Raymond Burr (“Ironside”, “Perry Mason”). While fundraising for restoration and renovation continue, a temporary 242 seat live theatre venue has been created within the lower cinema space.

The Building was Landmark Listed on March 7, 2001.

The Columbia Theatre reopened its doors in November 2011 after more then a year of complete renovation from its previous life as the Burr Theatre to a cabaret style live show theatre with two stages.

It is now the home of Lafflines Comedy Club, as well as live music shows, variety shows, burlesque shows, fundraisers and, most fittingly, weddings.

It is equipped with HD projector and 3D-ready screen, which is used regularly by live avts to create a 4D entertainment experience.

Down the street a block is what was New Westminster’s other prime movie experience, the Paramount. Although I have no info on its history, I do recall that the inside was equal to the Columbia (Burr Theatre), as was the movie-going experience.
It’s still standing, but the insides were massively redesigned (tho apparently not gutted) to suit its current format, that of a strip club.
In my mind, the Paramount was a nicer theatre than the Columbia.

The ‘highlights’ have now been removed. Thanks for pointing that out.

Was it never demolished? News reports all say that Lafflines comedy club has been renovating the old Burr Theatre and is moving in this spring.

Juliet balconies direct from our factory for a price you won’t beat anywhere. No hidden costs – all prices are inclusive of vat, paint, galvanising and fittings. Many balconies in stock for immediate UK delivery. Or we can make any design you want in any size – just call us!

This renovated heritage theatre has reclaimed its original name and it is now called the Columbia. While Lafflines Comedy Club is thriving with the flexibility of two venues, the Columbia is now the talk of the town with live music concerts, corporate events, community fundraiser events and weddings. Please visit www.theColumbia.ca or Facebook/530columbia or Youtube channel “530columbia”