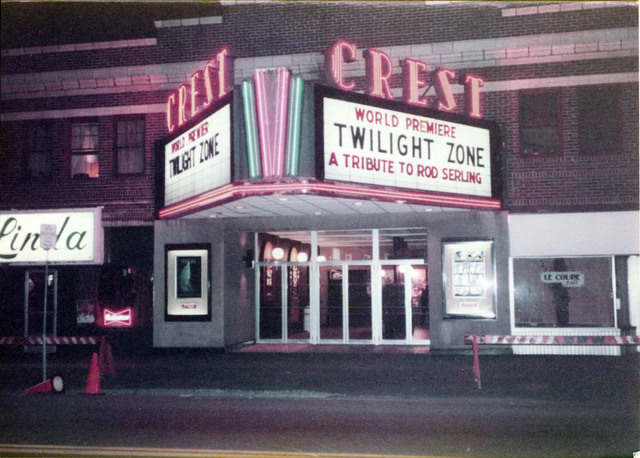 This big old classic movie theatre was destroyed to make room for a drug store which never opened. It was the site of the world premiere of “The Twilight Zone” movie.

My grandfather, Charles F. Davis managed this theater until his death in 1975. When he played El Cid in the 1960s, the lobby was decked out like the fight scene. They did things with class back then. He demanded all male employees wear a Tuxedo and all female employees wear dresses. In the ticke booth he had a sign that said Admission 5 Cents. My father managed The Jarvis down the street on Main Street.

My grandfather, Samuel Sunness, owned the Jarvis, Crest, Art and Airport DriveIn theatres. I too spent many Saturday and Sundays there, free of charge. If I remember correctly, if you brought your own container the popcorn was free, Anyone remember that?

I was probably past the age when you could get anything for free, but I remember the vending machines in the hallway where you could get soda when the concession stand was closed. The little paper cup would come down, get filled with the clear carbonated liquid, and then the flavored syrup would come down. My favorite was the cherry flavor. I saw many movies at this theater, but my most vivid memory was seeing Bambi. Anyone who has seen Bambi should know why.

I know the person who is the manager of the theater in the Binghamton High School building. I will ask about the Serling name carving. The theater in the HS building was named the Helen Foley Theater after Rod’s high school drama teacher. The school also has a Rod Serling School of Fine Arts, which my son is a graduate of. There is a bkack and white portrait of Rod on his diploma.

I have fond memories that of going to the Crest. My dad was friends with the manager and as a result admission was free. Back then we celebrated Russian Christmas, as a result there was not much to do on December 25. If was great that the Crest was open.

Reopened as Crest on July 4th, 1958. Grand opening ad in the photo section.

Does anyone recall or know if the “Red Shoes” was shown at the Crest ? It might have been about 1958 0r 1959 ? The great dance film with Moira Shira by Powell and Pressburger. Would appreciate any information. Thanks, Ann

I remember seeing photos of lines of ppl waiting to see “Psycho” in the 1960 at the Crest, & saw “Silence of the Lambs” there in ‘90 or so. I went to Seton CCHS on the West Side, & we were bussed to the Crest during the day to see “Ghandi,” which was a big deal. Otr fun movies there were “Scanners” and “Halloween 2,” which “everyone” apparently saw on its opening wknd. Good grief! I saw “The People Under the Stairs” there w/a friend during the wk in the '90s, & something about the theater’s deeply creviced architecture thoroughly creeped me out! I was about to ask for my $ back, but some more ppl came in & I calmed down. Weird, hunh? Going to see a scary movie to be scared but backing out b/c the movie theater looks creepy if you look at the walls too closely? HA HA! I visited the West Side a few years ago & went out of my way to drive by the Crest for old time’s sake & couldn’t “find it.” (It was right by the Dunkin’ Donuts!) It took me a while to realize they’d torn it down & put up a parking lot (just like the song). A part of my childhood died when I saw that…. /Glenn