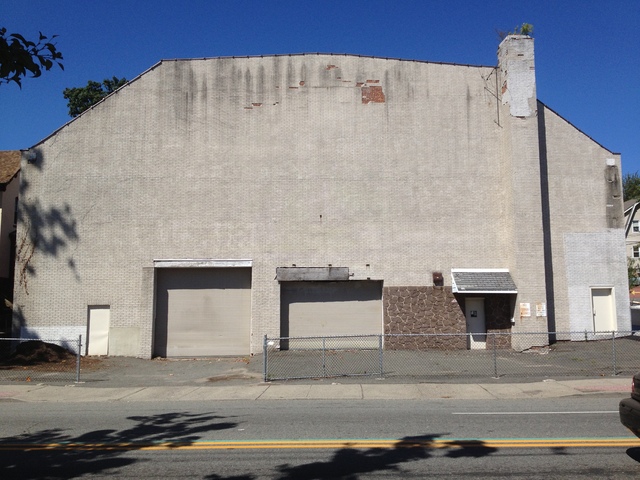 The Llewellyn Theatre was opened around 1927. It was renamed Edison Theatre in the 1930’s and in 1939 it became the Windsor Theatre. Main vaulted auditorium portion still stands on Main Street at the corner of Erwin Place, but the lobby has been demolished and removed.

After it closed as the Windsor Theatre around 1963, it became the Admiral Benbow Inn, and later the Carnaby Street Disco. Today it is the home of Eisler and Company, which distributes confectioners' products for convenience stores.

The Windsor opened circa 1927 as the Llewellyn, beacme the Edison in the early thirties, and the Windsor around 1939. It featured an elaborate proscenium arch flanked by two double sets of corinthian columns and two large ornate grilles masked a water driven air cooling system. the 1000 seat auditorium also featured burgundy colored tapestry displays on three walls, and an oval lighting dome in the ceiling. The Windsor fared well as a subsequent run neighborhood movie house until the mid fifties and the Windsor run came to an end with the house operating on weekends only in its final season. The theater was renovated in 1957 to accomodate live plays, seating was reduced to 796 seats to allow for a deepened stage, but despite good reviews the venture (called Suburban Playhouse) was unsuccesful. Then followed a few name changes… West Orange Playhouse (1958-60) , second run art films, Suburban Cinema . an unsuccessful stab at silent film reperetory, (1960), Suburban Theater (1960 -62) the theater"s most successful run as a combination neighborhood theater and revival house (this venture closed due to a lease dispute.) The Windsor finally ended its days as a theater as the Majestic… the management at the time just couldn’t find a successful operating policy, and it played its last performance (“Toys in the Attic”) in August 1963.

A Play by the Kerrs to be presented on Sunday by the Madonna Players at the Suburban Playhouse, 252 Main Street, West Orange, N.J. Performances will be given at 3 and 8:30 P.M.

After the theater closed it when through some remodeling and held several industrial companies over the years. In 2011 it went through a total gut in order to make the building into a recreation center. I was told by the company gutting it that I could shoot it. As soon as I got confirmation they said “Oh I wish you had gotten here the other day, when we took down the vaulted ceiling”. Needless to say I was crushed by that. I still took some photo’s though, as I will post soon. They will just show that the building is a shell though.

Its “Edison” name was very short-lived due to the objections of the Thomas Edison family (who lived in town; the inventor’s laboratory and factory were catty-corner across the street). The theatre showed Saturday movie matinees until 1962 and possibly into 1963. The stated number of seats seems very inflated. Even as children, we realized that it was not a terribly large theatre. My assumption was that it was more in the 500-seat range. The shell still exists to give an idea of its size and to back-up that assumption.

Because of the town’s close association with Thomas Edison, the Windsor (having changed its name and management) was one of the six area movie theatres used for the May 16, 1940 World Premiere of M.G.M.’s Edison, the Man starring Spencer Tracy. Tracy, himself, attended the events which included a grand ball and a parade in a torrential downpour.

I Have an original accounting ledger for the Windsor Theatre with entries dating to 1948. Is there somewhere to donate this amazing piece of history. Will send photo if interested. please respond.