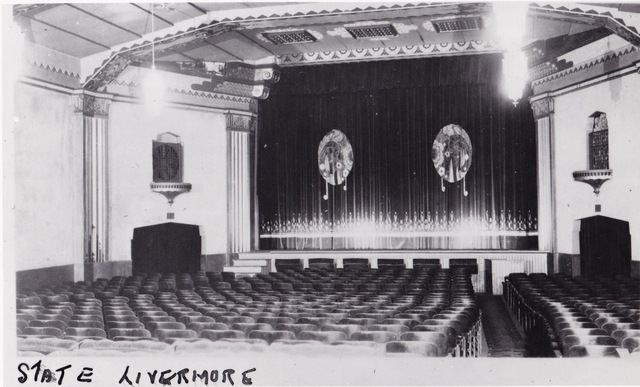 The theatre retained the original Bell Theatre name into the 1920’s. For brief periods it was also known as the Livermore Theatre and the California Theatre. It was finally called the State Theatre in 1931 when it was remodelled to the plans of architectural firm Miller & Warnecke of Oakland. It remained Livermore’s movie theatre until closing on December 22, 1956.

Livermore moved from a small agricultural and ranching community to a residential suburb with the arrival of Lawrence Livermore Laboratories in the 1950’s. With the growth of the city, the State Theatre had too small for the population growth. The Vine Theatre was built approximately ½ mile west of the State Theatre near the intersection of First and P Streets and opened on December 26, 1956. The Schenone Building still stands. For years it housed Dunbar’s Family Amusement Center; it now is home to Quizno’s and has received a new, somewhat controversial paint job.

This webpage shows the Bell and State at different locations:
http://tinyurl.com/y39vmm

There were two different Bell theatres. The first Bell Theatre was built in 1909 and located at 2nd and J Sts. It burned down in 1919; it was this site that later became home to the Montgomery Ward catalog store and Helen’s Blossom Shop into the 1970s. The second Bell Theatre was built into the Schenone Building, one block north of the old theatre, at 2235 First St. It retained the Bell name for only a couple of years; it later became the Livermore Theatre and the California Theatre, and by 1931 was renamed the State Theatre.

Boxoffice of May 19, 1956, announced the intention of West Side Theatres to build what became the Vine Theatre in Livermore. The item said that the new house would replace the chain’s State Theatre. The Vine opened in late 1956. I’ve been unable to find any Boxoffice item specifically announcing the closure of the State, but I haven’t found the house mentioned in the magazine after 1956, so it probably was closed as soon as the Vine opened.

At 2222 Second Street, you can see the stage house of the State Theatre, which has been converted to retail use with two floors of (probably) offices above. The theater was built behind the existing Schenone Building, with a long passageway leading through it to the new auditorium. A sign to the left of the Second Street entrance identifies the place as The Old Theatre Mall.

A couple of modern sources say that the Bell Theatre began operating at this location in 1914, but I’ve found no period sources saying anything at all about the theater other than that in 1921 the proprietors were Kline & Levy.

The Livermore Theatre was remodeled in 1931. This item is from the September 19 issue of Building and Engineering News (and it appears that Livermore’s lots have been renumbered since then):

The last time the State appears in movie listings is the 12/22/1956 edition of the Oakland Tribune. “Rebel in Town” with John Payne and Ruth Roman and “The Search for Bridey Murphy” starring Teresa Wright were the attractions. The new Vine Theater opened on 12/26/1956.