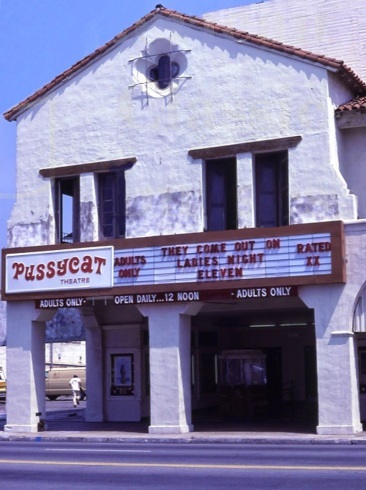 The Lido Theatre was created in 1942 within the stage house of the 1929 built, Riverside Theatre. It had it’s own separate entrance and marquee at the rear side of the building and the conversion was designed by architect Clifford A. Balch.

A similar scheme was carried out at the Redlands Theatre, Redlands, California (also operated by Fox West Coast Theatres).

The Lido Theatre was taken over by Walnut Properties in 1978, and became an X-Rated theatre in the Pussycat Theatres chain. It was closed in around 1992, together with the Fox Riverside Theatre and the entire building remained vacant for many years.

It was purchased by the city in 2006, and they began a 32 million Dollar restoration on the Riverside Theatre in 2009. The old stage-house (former Lido Theatre) was restored and enlarged by 20 feet, as the new stage for the Fox Performing Arts Center, which reopened on January 15, 2010.

During the last half of it’s life as a theatre. It was operated by Pussycat Theatres as a adult theatre.

does anyone have a contact number to the owner of lido theatre? if so, please send me the number to

The Lido is technically part of the Fox Theatre, which is currently being renovated.

Fox West Coast Theaters will open its first art house, Stage One, this week in Riverside. Planned as a showcase for screening of adult entertainment, Stage One, formerly known as the Lido Theater, is located backstage of the historic Fox Theater, which has been a preview showcase of Hollywood films for more than two decades. â€œThe Shop on Main Streetâ€ will be the first presentation at Stage One.

The August 21, 1972, issue of Boxoffice reported that the Stage One Theatre in Riverside had been closed indefinitely. Fox Riverside manager Dave Lackie gave a lack of suitable product as the cause for the closing, but added that the equipment remained in place and that the theater could be reopened if potentially profitable releases became available. The house had enjoyed considerable success for some time after its 1966 opening, Lackie said.

I’ve been unable to discover if the house was ever reopened under its old policy after this closure.