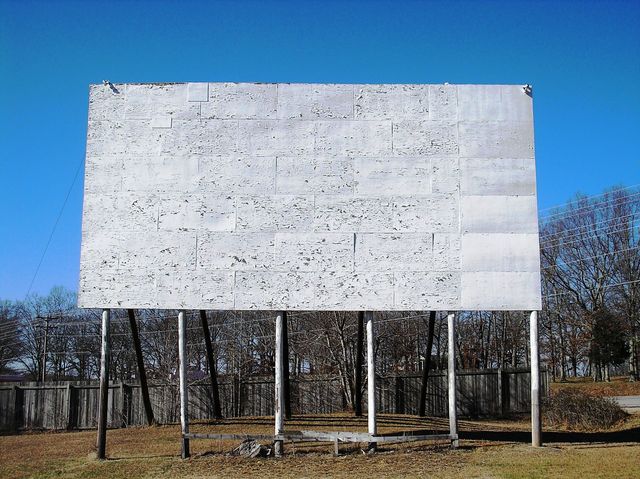 The Pink Cadillac Drive-In opened in 1950 as the Bel Air Drive-In. This drive-in has a capacity for 200 cars and remained open in 2008.

Marquess with all different size and color letters drive me crazy.

Interesting will have to check it out if it is still open.

Did u see the photo of the screen? The place looks abandoned

From Archive.org’s copy of the defunct Pink Cadillac web site as of August 2009:

Ed Worley built the drive-in in the late 1950’s and named it The Bel Air. The theater was run by Clement and Mary Warren until the mid-80’s, a time when most drive-ins had already folded, with only 19 remaining in Tennessee in 1987. By 1999, there were only 14 remaining statewide.

Lisa and Donald Forrester purchased the Bel Air in 1992. They built a new screen, lengthened a fence around the screen, replaced the original projection equipment and the in-car speakers for FM radio sound. They gave the theater a pink theme and renamed it the Pink Cadillac Drive-in.

In 2000, the Forresters sold the Pink Cadillac to Leslie and Melissa Curtis.

Two more notes. The Pink Cadillac web site was wrong about Tennessee. My 1987 International Motion Picture Almanac lists about 60 for the state.

And good news: From what can be seen of the screen in this June 2016 Google Street View image, it looks much better then JackCoursey’s photo here.

Do you need a pink cadallac to go to this drive-in(lol)!?