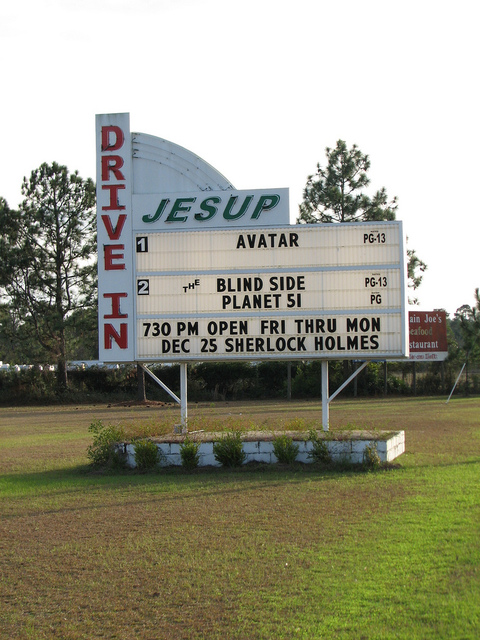 The Jesup Drive-In opened in 1948 as a single screen theater. The drive-in closed for a few years in the 1960’s and remained closed until 1970 when it re-opened as the Jesup Twin Drive-In adding a second screen to the 11-acre theater.

In February 2012 it was taken over by new operators, and in September 2012 it was equipped with a Christie CP2230 digital projector for Screen One, and renamed Jesup Drive-In.

I HAD HEARD THIS TWIN WAS STILL OPEN. IN 1956, JESSUP HAD THE FAMILY DRIVE IN THAT PARKED 300 CARS AND WAS OWNED BY W.P. REGGINS. THIS MUST BE THE SAME DRIVE IN?

Here are two pictures from December 2009.

In September 2011 the cinema was closed “temporarily for construction; reopening spring 2012”, according to the sign (see my photograph).

The original Drive In was the “Family Drive In” built by Ward P. Riggins Sr. who also owned and built the Strand Threater downtown, in the middle of Jesup. We are working on a history of the two theaters.

Jesup Drive In Theater has re-opened with new owners, Ralph and Jamie Hickox. They are restoring the theater back to the 50’s theme as a historical landmark. www.jesupdrivein.com, FB: http://www.facebook.com/pages/Jesup-Drive-In/220236301412224

This is possibly the oldest Drive-In in Georgia founded in 1948. Any old photos or historical information would be appreciated.

This drive-in has changed ownership and changed it name to the Jesup Drive-In Theater. Please change the listing. This drive-in is the oldest “living” drive-in in Georgia and one of only four remaining in the state. They just added a digital movie projector to screen one. They have a new web site that will go “live” any day now: http://www.jesupdrivein.dreamhosters.com/

According to their website both screens are now digital projection.

Uploaded some pictures of the old concession stand. They are building a new one!!

The Family was back in Jesup in the 1969-76 MPAs with a capacity of 350. When ownership info returned in the 1978 MPA, its name had changed to the Jesup, the owner was Cockfield, and capacity was 250. In 1980-88, the Jesup Twin was owned by Floyd Theatres of Lakeland FL.

The Florida Times-Union wrote in 1999 that “had been closed for 10 years when (Tim) Cockfield bought it in 1970. In 1975, Cockfield ‘twinned it,’ turning the back two rows around and adding two more.” It also said at the time that “Cockfield, 72, works behind the counter before the movie starts” and “Tim Cockfield Jr. … is poised to take over when the time comes.”

In 2012, the Savannah Morning News quoted Ward P. Riggins III, grandson of the original builder, who said “It’s been here since the 1940s.”

“There was only a short time when it wasn’t operational,” Riggins says. “My dad, who is 87, said they built the Jesup Strand Theatre in 1924 in the center of town. In 1948, they built the Jesup Family Drive-in.” … When Riggins’ grandfather got sick, Ward Jr. continued the business.

I believe this is one of only 14 theaters in the country to still be open among the coronavirus outbreak, which mostly consists of drive ins.