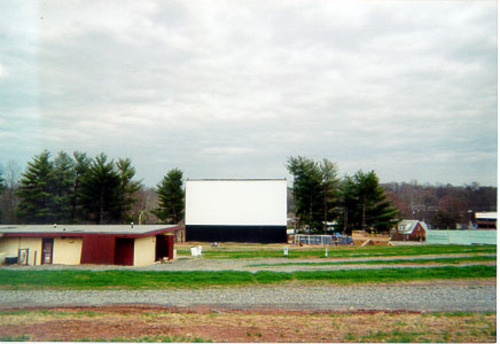 The Eden Drive-In opened in 1949 with a capacity for 200 cars. This drive-in remains open today.

This is one of the last remaining operating drive-in theatres in North Carolina. Last weekend, the season opened with ‘Fast Five’ and ‘Your Highness’.. this drive-in still does good business after all these years.

I was involved in the installation of the projection & sound equipment when the reopened after being closed for a decade.

The theatre is independently owned. In addition they also operate the 4-Plex formerly owned by “Consolidated” and then by “Carmike”. The owner also operates the “Rockingham Theatre” an indoor theatre in Reidsville,N.C. and a twin Drive-In in Abemarle,N.C.

Can you tell me if they have a screen wide enough to show movies in scope. A lot of drive in’s dont and a movie filmed in scope is off the side of the screen in the air. I hate that.

The Eden Drive-In is fully digital.

That would explain how it could handle over 800 cars on a three-night weekend. But I’m not convinced about where the original Eden was; looking at Historic Aerials' old photos and topo maps of the future Eden Mall site, I can’t find anything that looks like a drive-in nearby, except for what’s now the Eden far away on the west side of town.

Georgann Eubanks' wrote in her book Literary Trails of the North Carolina Piedmont: A Guidebook: R.S. (Sam) Gwynn … was born in Eden in 1948. His father ran the drive-in when Gwynn was growing up.

When ownership notes resumed in the 1978 MPA, the Eden was listed under the town of Eden and was owned by Consolidate, and that was how it stayed through its last list in 1988. (The New Leaksville dropped out of the MPA after 1976.)

Tim Robertson and his parents, David and Judy, owned the Eden Drive-In, although David passed away in January 2017. Tim told Business North Carolina just last month that his family bought the closed drive-in in 1994 and renovated it.

There is some truth to the location of the original Eden Drive In, which was located between Weaver and Pierce street on Meadow Road. My wife’s cousin even talk about walking down to it after it was closed in the 50’s or early 60’s. Nothing appears to be visible now where it stood but trees. Actually the property would have backed up very closer to Morehead High School and the Mall is a block or so down from it on the opposite side of Meadow Road.