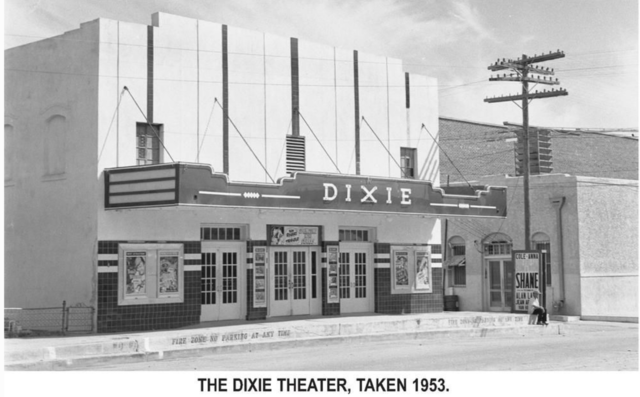 The 800-seat Dixie Theatre was opened by 1914. By 1950 it was operated by Long Theaters. It was still open in 1957, but soon closed and demolished. There is a bank parking lot where the Dixie Theatre once stood in the quiet and sleepy town of Coleman.

The Dixie Theater in Coleman, TX, was not on Pecan Street. The Dixie was at 114 West College Avenue by 1916.

The Howell Theater opened in 1928 and was located at 117 West Pecan Street. The Howell was later named the Rancho Theater.

These were on opposite sides of the same city block.

Both were owned and operated by B.C. Howell and the Howell family.

A history of the B. C. Howell family on this web page says that prior to opening the Howell Theatre in 1928 Mr. Howell had for many years had at least two theaters operating in Coleman at any given time, including the Dixie and a house called the Gem. Mr. Howell’s first theatrical venture in the town had been the Howell Opera House, which was in operation by 1904.