Grove Theatre in Peril After Refusing to Perform Play 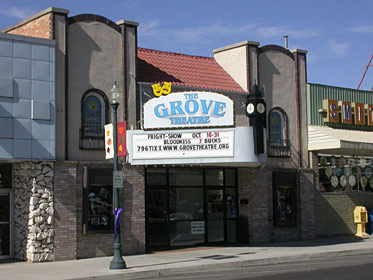 PLEASANT GROVE, UT – The Grove Theatre has been in financial peril since August 2003, when a cast member and a journalist reported the theater to copyright monitor Samuel French, Inc. for planning to perform Neil Simon’s play “Rumors” without profanity.

After being told that she “must present the play as written or not at all,” owner Gayliene Omary decided to cancel the play rather than go against community standards. The journalist then wrote a column on the situation he helped create, saying, “How Samuel French learned of the alterations is a mystery worthy of Agatha Christie…”

The dinner theater did not have a backup show ready and had already spent several thousand dollars in production costs and promotion. The closure exhausted the theater’s reserve fund of $20,000 and basically left the theater without any working capital. By April 2004, Omary was broke and was forced to cancel the theater’s two remaining plays.

Attempts at fundraising have failed to produce enough money to put on another production. Now the theater will be repossesed by the bank in June unless Omary can find investors – or as she calls them, “theater angels” – with at least $100,000.

The 80-year-old Grove Theatre is located in the small town of Pleasant Grove and was originally known as the Alhambra. As a discount movie theater, the Alhambra could not show R-rated movies because residents would not attend. The Towne Cinemas in nearby American Fork made headlines and sparked the current edited video controversy when it removed nudity and a sex scene from second-run showings of “Titanic”.

List of recent articles on the Grove Theatre:
http://utahtheaters.info/TheaterArticleList.asp?TheaterID=198

The play SHOULD have been presented as written. It’s the right of authorship and should be respected. Can copyrighted plays be rewritten at whim to reflect particular sensitivities, biases? Can they be altered to change political content? I really think not.

Absolutely, Gerald. It’s just unfortunate to see the theater become a victim of this controversy.

One of the newspaper articles on this controversy indicated that it is very common (in this area, anyway) for profanity to be removed or toned down in copywrited plays. It almost appears that this theater ran into trouble because a couple newspaper reporters wanted a good story. The one who was cast as a lead in the play apparently never expressed any objection to removing the profanity during rehearsals. The other, who was later fired for ethics violations because of all this, got involved in the issue and then waited to write an article until after the theater was forced to cancel the production. He started the article off with the line, “A local theater has learned the hard way that one must do what Simon says.” Rather than take their concerns to the theater managment, they set the theater up for a hard fall.

Editorial from executive editor of the paper:
View link

Nearly every play or musical ever written contains at least one element – language, sexual themes, etc. – which could possibly insult the sensibilities of at least SOMEONE in the audience; that’s both the nature and the beauty of a free society. I wish the Grove Theatre well, but I wish as well that Gayliene Omary comes to realize the importance of copyrights and the true meaning of artistic integrity.

She should have done the play sans the profanity, and left it to Samuel French to
take action.
I doubt the general publicity would have allowed French to be so bold.
Assuming he did sue or otherwise, 1st, he’d be against the battle of pubic opinion, he’d have to win in court, and if so, of course, the Theatre would be no worse off.
I respect her for taking a stand on a very minor alteration and wish she’d played her issue – that would have made for great theatre!