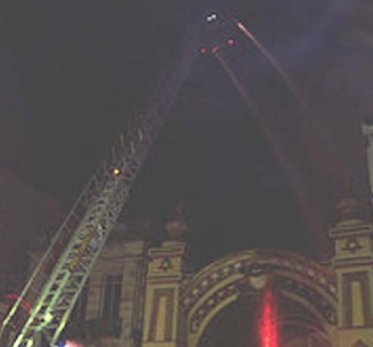 PORTSMOUTH, OH — You can see cranes and other heavy equipment outside the brick wall of what was the Columbia Music Hall. The historic theatre burned early Sunday morning. With the federal investigators methodically removing debris, no one will venture even a remote cause of the inferno.

“The entire Fourth Street parking lot is covered with [cars and equipment from ] the state fire marshal, ATF, Portsmouth Fire Department, Portsmouth Police Department and numerous other crews working on investigation and clean up,” said Claudette Ferguson, the now former sound engineer of the Music Hall. “They are removing any and all burned metal [and debris] from the shell of the Columbia by way of the crane and the huge bucket.”

On Wednesday, November 14, Ferguson was visited by members of the ATF. They interviewed her for about two hours. As confirmed by prior ATF fire investigations, Ferguson said, “they will be here until they find out the cause and if the cause is arson, they will continue to stay until they find the individual responsible.”

As the investigation continues, “the owners and the town are hopeful for a healing and rebuilding of the area and of the Columbia,” Ferguson said. “It’s so nice to know that there are other who care as much about our little theatre as we do.”

You can read more info on the Columbia fire at Huntington News.

UPDATE 11/20: Huntington News lists arson as cause of fire.