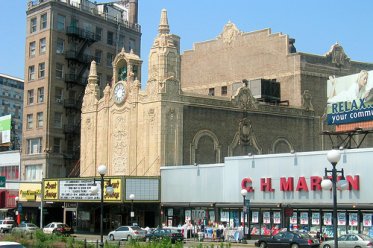 A boy-turned-pirate struggles to save his true love from an evil prince, with help from an interesting assortment of acquaintances. Sound familiar? If its story isn’t exactly original, The Princess Bride succeeds brilliantly because of how it approaches this tried-and-true formula. Director Reiner manages to combine subtle, sometimes acerbic humor with a classic understanding of what makes the elements of fantasy so appealing. The film also boasts truly good performances from the entire eclectic cast. Good writing as well as acting and directing keep a surprising array of subplots all moving along to satisfying endings. Sometimes considered a cult favorite, The Princess Bride actually deserves the often over-wrought honorific of “modern classic”.

BONUS! Come early and enjoy an audience “sing-along” with our Wonder Morton Pipe Organ! From 2:20 to 2:30PM.

La Camargue in the South of France is a vast, marshy region, Europe’s largest river delta. The region has its own eponymous horse breed, the famous white Camaguais ridden by the gardians who rear the region’s fighting bulls for export to Spain. White Mane is a magnificent stallion and the leader of a herd of wild horses “too proud and fearsome” to let themselves be broken in by humans. Folco is a young fisherman who lives in quiet, secluded harmony with nature, netting his catch each day and living in a cottage with his grandfather and little brother (a toddling Pascal Lamorisse, director Lamorisse’s son). He’s awed by White Mane and eventually becomes the only human that the wild horse allows to approach. A strong bond grows between the boy and the horse, but the insensitivity and selfishness of local wranglers threatens to wreck their world and Falco and White Mane must struggle to continue to live free. The B&W cinematography is first rate and makes magnificent use of the beautifully stark vistas of the Camargue, realistically depicting the story’s natural setting while also sometimes hinting at an other-worldly dreaminess. The White Mane is somewhat more conventional than Lamorisse’s more famous The Red Balloon, and children will enjoy it on several levels, from its obvious focus on a beautiful, wild animal, to the drama of escape, to the depiction of friendship accompanied by the fear of loss subjects that are subconsciously very familiar to children.

The film will be screened in a restoration print. The original release had both dialogue and a narration in French, but for this version the voice-over narration is in English by Peter Strauss, and has been expanded slightly to ensure that even those who don’t understand the dialogue which is still in French can easily follow the story.

A landmark short-subject and one of the most beloved children’s films of all time, The Red Balloon radiantly celebrates the ability of a child’s imagination to take flight and ruminates on freedom and the boundaries imposed by society and responsibilities. The story, told with only a few lines of dialogue, concerns a little boy (look sharp he’s played by the director’s winsome son, Pascal, who played the younger brother in The White Mane) who comes across a helium-filled balloon. As he plays with it, the boy discovers that the balloon seemingly has a mind of its own. Floating along with him, the balloon wreaks comic havoc on the boy’s daily routine, including school, and moves lyrically through his Paris neighborhood. There’s a darker moment or two as other children become jealous. And there is a haunting undercurrent to the deceptively simple fable that hints of how the joy of friendship is always shadowed by the possibility of loss, but director Lamorisse brings us to a magical conclusion that caps the film’s visual beauty. The film enchanted the Academy so much that it won the Oscar for Best Original Screenplay, a rare honor for a short subject (not to mention foreign and dialogue-free) film. Striking in its visual accomplishment and emotional appeal, The Red Balloon, despite its brevity, made a lasting impact on many who had the chance to see it when it was repeatedly shown on American TV in the 1960s and ‘70s.

The Red Balloon will be shown at the Loew’s in a restored print. There are subtitles for the few spoken lines, but the visual beauty and lyrical charm of the film needs no translation. Young and old alike should not miss the opportunity to see this beautiful film on the big screen.

Saturday, March 29 at 6PM Beauty and the Beast (1946 / French) Directed by Jean Cocteau. Starring Josette Day, Jean Marais, Mila Parely, Nane Germon. (93mins., B&W. Suitable for all audiences.)
This 1946 masterpiece is perhaps the most faithful of the many film versions of the 1756 fairy tale written by Jeanne-Marie Leprince de Beaumont. The film features tight, economical storytelling and enough visual fireworks (including many stunningly executed optical effects) to enrapture viewers from beginning to end. The actors are uniformly wonderful; Josette Day makes a stunning Belle, and Jean Marais excels in a triple role that includes the magnificent Beast. Cocteau gives the film a shimmering, romantic look. The costuming is extraordinary, and the unforgettable sets are a marvel of impressionistic romanticism, filled with symbolism that hints at the story’s darker implications. Disney not withstanding, this is the closest anyone’s come to capturing the essence of a fairy tale on film. Screened with subtitles.

Considered by many to be the definitive film interpretation of Victor Hugo’s classic tale, surpassing even Lon Chaney’s justly famous silent version. The few liberties taken by the screenplay do not diminish the power of Hugo’s tale of morality, integrity and humanity juxtaposed against corruption, deceit and inhumanity. Laughton gives one of the most touching performances ever filmed as the misshapen Quasimodo, who, in his struggle to overcome physical deformity and his status as social outcast, represents that which is most noble and heroic about mankind. Maureen O'Hara’s film debut here is also memorable. Director Dieterle created a film of both great sweep and remarkable intimacy. The credible recreation of 15th century Paris is another highpoint of this elegant film.

Each screening â€" INCLUDING the double feature of White Mane/Red Balloon — is $6 for adults, $4 for seniors, students with I.D. & children 12 years old and younger. Combo discounts are available for multiple screenings. Call (201) 798-6055 or visit www.loewsjersey.org for more info.

Doors will open 30 minutes prior to each of the above show times.

PLUS â€" In the grand Movie Palace tradition: Prior to each screening, as audience members enter the auditorium, they will have the chance to enjoy live “entrance music” played on the Loew’s Wonder Morton pipe organ! Ralph Ringstad, Jr., member GSTOS, will perform on the keyboard.

The Loew’s Is Easy To Get To: The Loew’s Jersey, at 54 Journal Square, Jersey City, is directly across JFK Boulevard from the JSQ PATH Center with trains to and from Lower and Midtown Manhattan and Newark’s Penn Station, is minutes from the NJ Turnpike & easily reached by car or mass transit from throughout the Metro Area.

Half-price off-street parking is available in Square Ramp Garage adjoining the Loew’s. Patrons present a coupon to garage attendant when they leave. Coupon is available at our box office.

The Landmark Loew’s Jersey Theatre is one of America’s grandest surviving Movie Palaces, and now operates as a non-profit arts center. The Loew’s screens movies in 35mm on our 50 ft wide x 25 ft high screen, using carbon arc illumination for the brightest, whitest light. We run reel-to-reel, not platter, which often allows us to screen an archival or studio vault print that is the best available copy of a movie title.

Classic Film Weekends are presented by Friends of the Loew’s, Inc., which manages the Loew’s Jersey as a not-for-profit arts center.

A Special Screening of All About Eve

(Thanks to wallyg for providing the photo.)

The princess bride was a favorite of mine when I was young, as well as my cousin Chrissy. It would be nice seeing it on the big screen, so I should tell her when she feels better to check it out. Of course, she has the VHS version of the film. Too bad it’s not on blu-ray. The movie was Andre the Giant’s only film role before he died, leaving The Big Show, his son, as a successor…he will wrestle Floyd Meriweather in Wrestlemania 24. As for the movie showing at the theater, hopefully the flooding will subside so I can get there with Chrissy on time.