Friends of the Loew's, Inc. (Official) 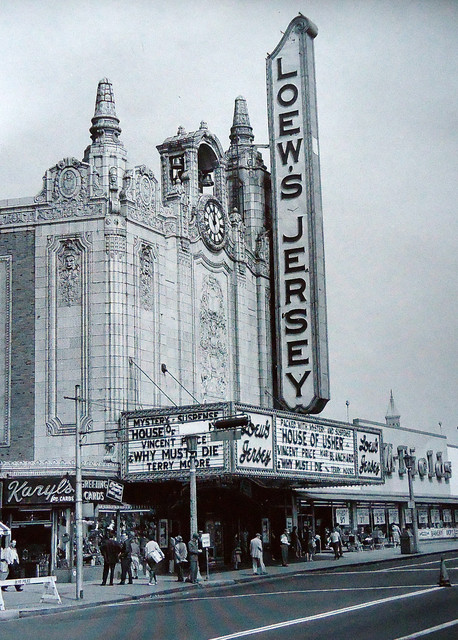 The Loew’s Jersey Theatre was the 4th of five Loew’s ‘Wonder Theatres’ to open in the New York City area, opening just two weeks after the Loew’s Paradise Theatre, Bronx and the Loew’s Kings Theatre, Brooklyn, which had both opened on September 7, 1929. The Loew’s Jersey Theatre opened September 28, 1929 with Ruth Chatterton and Lewis Stone in “Madame X”. On stage were Ben Black and his Rhythm Kings plus “Cameos” direct from the Capitol Theatre, New York featuring Chester Hales Girls. In the orchestra pit were the Loew’s Symphony Orchestra and the mighty Robert Morton ‘Wonder’ organ which had 4 manuals and 23 ranks. Resident organist for many years was Ted Meyn. The building had cost $2 million to build and the wonderful Baroque style façade still boasts the mechanical clock of George & the Dragon, a companion piece to the one (now lost) on the top of the façade of Loew’s Paradise Theatre, Bronx.

The opulent Italian Renaissance style auditorium with its 50 foot wide proscenium is reached by passing through a dramatic three-storey lobby rotunda, supported by jade-green columns. In the music gallery above the entrance on the first floor, a grand piano was played to entertain waiting patrons. As was the case in all big movie palaces, the 35 foot deep x 82 foot wide stage was put to good use in the early years with artistes such as Bing Crosby, Bob Hope, The Ritz Brothers, Jackie Coogan, Russ Columbo and His Band and many others appearing. The orchestra pit (which is on an elevator) was boarded over in 1949.

Later in January 1975, two additional screens, each seating 524, were placed in the orchestra seating area beneath the balcony, leaving the main screen in the balcony, with a seating capacity of 1,078. The Robert Morton ‘Wonder’ organ was removed at this time and now resides in the Arlington Theatre, Santa Barbara, California. The Loew’s Jersey Theatre closed on Thursday August 21, 1986 with “Friday the 13th Part VI:Jason Lives”.

In April 1987 it was sold to a private company for demolition, but preservationists saved the theatre from becoming an office building and the theatre was purchased by the city in 1993. The Friends of the Loew’s had been formed and they embarked on an ongoing renovation/restoration project beginning in 1995. The wall dividing the orchestra seating into two screens was removed, and the theatre was re-opened to the public in 2001 (albeit in the beginning using only a fraction of the seating area in the orchestra level). Regular monthly screenings of classic and revival films began during fall, winter and spring, and as work by the dedicated team of volunteers has progressed over the years, the program expanded to also presenting occasional live performances and concerts.

The Garden State Chapter of the American Theatre Organ Society acquired a ‘sister’ identical Robert Morton ‘Wonder’ organ that had been originally installed in the Loew’s Paradise Theatre, Bronx. After several years extensive work on the instrument, it was ready for its debut in its new home at the Loew’s Jersey Theatre in late-2007.

The Loew’s Jersey Theatre has become the centerpiece of the Journal Square renaissance, and is listed on the National Register of Historic Places.

It was closed at the end of 2021 for a full refurbishment/restoration to be completed by 2023.

The upcoming restoration calls for the theatre to close some time in 2022 for an 18-month renovation and restoration.

Let’s hope we get the opportunity for a few more classic film programs during the fall and winter of 2021 before the 2022 restoration “shutdown”.

The renovations are underway! The Jersey closed at the end of 2021 for a two year restoration!

What will it be used for when reopened?

It will be a performing arts center, but we’ve been promised that the classic movie screenings won’t be discontinued. I hope they mean it.

Will all the volunteers of the last years that kept this building operational be honoured?

I hope so too, Bill! The Loews, in all of its collective glory and beauty has been such an oasis for so many film lovers over the past twenty-five years or so… I hope its beauty and heritage are respected and maintained! (As someone who grew up in Hudson County I completely “get” the “hesitation” of many of us regarding local politicians!)

The Loew’s Kings in Brooklyn had a similar restoration some years ago, but as far as I know they’ve only had one classic movie event (Barry Lyndon). The Loew’s Jersey has a better claim on keeping classic movies being shown, since the building would have been torn down long ago if not for Friends of the Loew’s and their classic movie shows.

As far as I know, the city’s contract with the commercial operator that will eventually run the theatre guarantees that Friends Of The Loews a specific number of dates to run their own programming. How this will work out in real life remains to be seen.

Has the $70 million dollars for the restoration been made available yet? I hope so.