Imagining the Future On The Big Screen 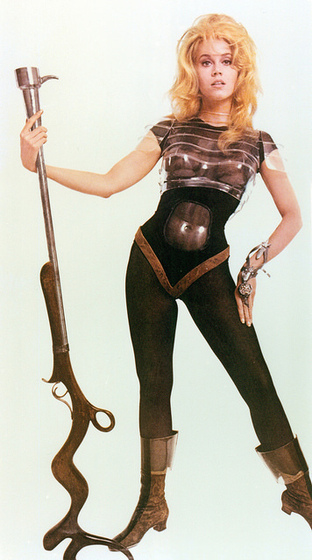 To create this wild, visually audacious satire, Terry Gilliam combines dystopian elements from Orwell, Huxley and Kafka (plus a central character who mirrors Walter Mitty) with his own trademark, Monty Python-esque, jet black British humor and his gift for extraordinary visual invention. If the themes of a machine and technology driven future where individuals are oppressed by a totalitarian elite and state are as old as “Metropolis”, Gilliam achieved what is arguably the most potent, visually striking and thought provoking treatment of the subject since “Metropolis”. Jonathan Pryce stars as Sam Lowry, a civil servant who chooses to blind himself to the decaying, drone-like world around him. It’s a world marred by oppressive automatization and towering bureaucracy, and populated by tyrannical guards who strongarm lawbreakers. And Lowry is stuck in the middle of this nightmare. Whenever real life becomes too oppressive, Sam fantasizes (to the tune of Ary Baroso’s 1930s hit “Brazil”) about sailing through the clouds as a winged superhero, and rescuing beautiful Jill Layton (Kim Greist) from a giant, Samurai warrior. The omnipresent computer that controls everything in the “real” world malfunctions, causing an innocent citizen to be arrested and tortured to death. When Sam routinely investigates the error, he meets and pursues Jill , literally the girl of his dreams. But in real life, she’s a tough-as-nails truck driver who initially wants nothing to do with him. It turns out that she is suspected of underground activities, in connection with a terrorist network wanted for bombing public places. The price Sam pays for his association with her is a close encounter with the man in charge of torturing troublesome citizens (Michael Palin).
Admission: $7 for Adults, $5 for Seniors (65+) and Children (12 & younger).

“Barbarella” is just as visually striking as “Metropolis” and “Brazil” — but for different reasons. If “Metropolis” and “Brazil” are extraordinary projections of their times' worries about the fate of humanity, “Barbarella” was the projection of its time’s exuberant embrace of the sexual revolution. In the late 1960s, the new American openness about sex still seemed fresh, fun and exciting and often found its way onto the movie screen in hip, double entendre-filled comedies. If you can re-conjure that feeling, seeing Barbarella back on the big screen will be a unique treat, a kind of sexy time warp. But if you try to take the movie seriously – well, just don’t; those who do tend to put it on “Worst Ever” lists. But they’re missing the point. It’s an outrageously silly, self-consciously erotic sci-fi send-up that’s so bad it’s good. A voluptuous outer space agent (Jane Fonda) is dispatched by the government of United Earth in the 41st century to locate scientist Durand Durand, whose “positronic ray” could bring the end of humanity. As she treks across the galaxy in outfits that James Bond and Hugh Heffner would have approved, our heroine – hitherto having known only futuristic “advanced” virtual sex (next heard about in Woody Allen’s “Sleeper”) – discovers the possibility of the real thing with a keeper of feral children, a blind angel displaying remarkably bronzed pecs and an inept revolutionary named Dildano. And she must escape the evil designs of a Bond-esque super villain named the Great Tyrant (a Eurotrash dominatrix type played by Rolling Stones gal pal Anita Pallenberg) and her henchman Concierge, who has an enlarged libido, so to speak. — But enough about the plot, because it doesn’t really matter. This is 200 proof camp – a coy European sex comedy with an American accent, psychedelic vibe and over-the-top production that mashes “The Wizard of Oz”, “Alice In Wonderland”, “Star Trek”, “James Bond” and Playboy all into one crazy mix. With a zero-g peep show in the opening scene, a few bare breasts along the way, and a whole lot of not-so-subtle double entendres, the film would certainly never have passed the puritanical old Production Code. But it’s all erotic camp, not porn. Fonda’s studied vacuity, Pallenberg’s kinky glamour and the frequent spoutings of hippie truisms by the angel with the remarkable pecs all give the feeling of good, if not quite clean fun. From the eye-popping plasticity of the sets to the gentle grooviness of the Bob Crewe Generation’s campy lounge soundtrack, Barbarella is a defiantly trivial film. But that’s ok if you just sit back and enjoy the ride. BTW: The film’s missing scientist character famously inspired the band name of ‘80s pop stars Duran Duran (who altered the spelling slightly).

In the somewhat distant future (some editions say the year 2000, others place it in 2026, and, still others — including the original Paramount U.S. release — in 3000 A.D.) the city of Metropolis, with its huge towers and vast wealth, is a playground to a ruling class living in luxury and decadence. They and the city are sustained by a much larger population of workers who labor as virtual slaves in the machine halls, moving from their miserable, tenement-like homes to their grim, back-breaking ten-hour shifts and back again. Freder is the son of the master of Metropolis, and is oblivious to the plight of the workers or any aspect of their lives until one day when a beautiful subterranean dweller named Maria visits the Eternal Gardens with a small group of children from the workers' city far below. They are sad, hungry, and wretched looking, and Freder is haunted by their needy eyes — something he has never seen or known among the elite of the city — and by the beautiful Maria who asserts that workers' children and ruler’s offspring are all brothers. He follows her back down to the depths of the city and witnesses a horrible accident and explosion in the machine halls where the men toil in misery. “Metropolis” has had a seminal influence on many of the futuristic movies that have followed it. Featuring literally a cast of thousands, “Metropolis” creates a reality so complex and artistically unified the viewer gets swept away to this future world. Director Fritz Lang’s surreal and occasionally incomprehensible storyline is overwhelmed by a visually spectacular exercise in German expressionism. Master cinematographer Karl Freund fills the screen with an array of stylized shadows, oblique camera angles, geometric images, and nightmarish labyrinths. The film’s warnings about techno-demagoguery continue to have modern relevance. The actors may give stereo-typical silent-film performances, full of exaggerated expressions and broad gestures, but they succeed wonderfully in expressing their characters' fragile humanity. Rudolf Klein-Rogge’s unforgettable work as the evil genius Rotwang became the template for all subsequent mad-scientist performances. Despite being a critical and popular disappointment on its initial release, the film eventually gained cult status and was rediscovered by critics and audiences alike. When it was re-released in the 1980s, some missing footage was restored and a synthesizer-heavy soundtrack by Giorgio Moroder was added, to much gnashing of critical teeth.

When it was premiered in Germany in January 1927, Metropolis ran 153 minutes when projected at 24 frames per second. That complete version was heavily cut for release in America, removing a quarter of the movie — this included the personal conflict between Fredersen and Rotwang; a subplot involving double-dealing, espionage, and the mysterious “Slim”; a section taking place in the “red-light” district of the city; a good deal of the symbolism in the movie’s original dialogue; and a large chunk of the chase at the end. In 2008, it was reported that a significant part of the “lost” footage from the 1927 153-minute version of Metropolis had been found in Argentina. The newest restoration of “Metropolis” was released in 2010. Don’t miss this opportunity to see it on the Loew’s Big Screen.