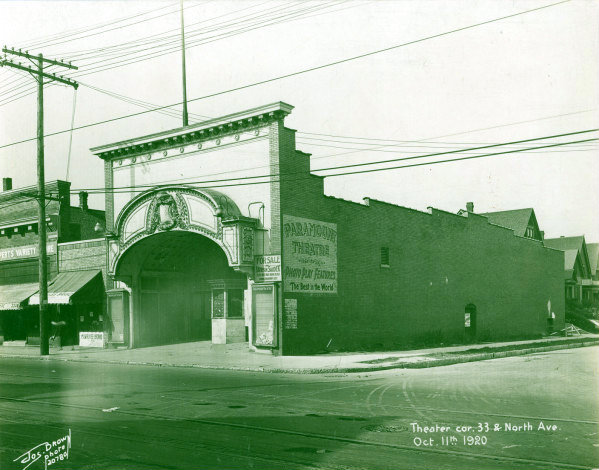 A few doors east of Milwaukee’s Comet Theatre, a larger structure was designed the same year (1910) by prolific Milwaukee architect Charles L. Lesser whose theatrical ‘masterpiece’ was the Riviera Theatre far from here on the south side.

His 2-½ story red brick Queen Theatre may have had a stagehouse, but little is known of its original decor in this 30x120-foot concrete block building. As a neighborhood cinema it had only a wooden roof and floor, but at least they had some attempt at decor with draperies about the auditorium, which the building inspector ordered removed. It did sport a balcony and staircases on either side of the lobby.

Its 584 seats continued until 1952 when this theatre suffered the ultimate indignity for a theatre: it was converted into a popcorn factory for other theatres by the father and son team of Milwaukee architects A.L. and A.W. Seidenschwartz, the same men who did so nice a job converting a theatre of this era into a nice little Atmospheric style: the Grand Theatre many blocks east on Holton street.

During this time the building was owned by the Fox-Wisconsin Amusement Corp., which ran many other theatres, but some years later it was sold to the present owner, Fred’s Security Door Co., for which it is now a store and factory. If Charles Lesser and the original owner wouldn’t recognize the interior, they could at least admire the original brick detailing and stone trim of the facade along with the enormous oculus on the gable peak which evidently helped ventilate a balcony filled with laughter so many years ago. At various times it was also known as the Paramount Theatre and Tivoli Theatre

Perhaps others have personal memories of this showhouse which they will share here. I did not grow up near it, but in the southern suburb of Greenfield, so am hoping that someone knows more.

In a 2010 google street view, the building has been renovated – the exterior all cleaned up with the original red brick glowing brightly. The building is now the Forest County Potcowotomi Community Hall. The adjacent buildings and street/sidewalks are all currently being renovated.

You can see what the queen or paramount theater looked like back in the 19 20’s.