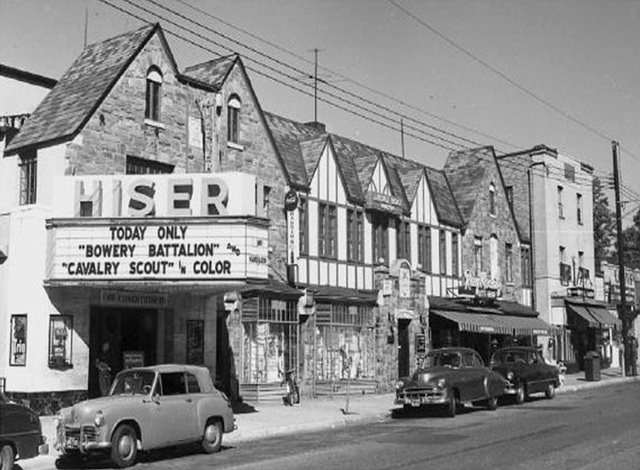 Opened as the State Theatre in the 1920’s, it was renovated in an Art Deco style in 1940 by Bethesda architect V.T.H. Bien, with interior decoration by Paramount Decorating Co. It was renamed Bethesda-Hiser Theatre. It was a single-screen theatre while the Baronet West was a twin built in 1975 several blocks from its namesake. The KB Baronet Theatre, with its 498 seats and no concession stand, was relatively small - compared to other theatres in the area such as the KB Bethesda, KB Silver, KB Flower, KB Langley - but very popular as it often had “exclusive” bookings.

In the mid-1970’s, it played “Save the Tiger”, “Bloom in Love”, “The New Land”, “Blazing Saddles”, “Dog Day Afternoon”, “Uptown Saturday Night”, “Young Frankenstein”, and “White Dawn” among others. Many of these bookings were either exclusive or limited within the Greater D.C. Metro area. “Blazing Saddles” and “Young Frankenstein” each played for 22+ weeks grossing $300,000 and $350,000 respectively in 1974 dollars!

While the theatre lacked a lobby of any appreciable size as well as a concession stand - a temporary one was installed for the run of “Young Frankenstein” - it did have a variety of vending machines - a small plain popcorn was $.40($.10 more for butter). Among the theatre’s charms was a full stage with recessed lights and the aforementioned organ. After years of restoration, the organ was used for select bookings of old silent films with live organ accompaniment.

“The Omen” was among the last “big-budget” films to play there. The very last booking was “The Happy Hooker Goes to Washington”. The theatre closed down 23 August 1977 - one week after the death of Elvis Presley! On the site now sits a Hyatt Hotel.

I saw “How The West Was Won” (1962) with my mother in the KB Baronet, my first movie theatre and matinee experience. I was 4 years old and very restless during the picture (Mom was far more interested in the all-star cast then I) and went to the vending machines a lot, if only to look. My impression was the seating area was very short and wide, and the screen very large in proportion to the room. I don’t remember a lobby, but that the daylight coming through the entrance doors partially lit the vending area in the back of the theatre. Years later my whole family saw “2001 A Space Odyssey” (1968) there. Somewhere I have some 35mm slides of the Baronet marquee (literally) just before it was demolished in 1977/78, which I will try and post here in the future.

I was a K-B Theatres relief manager in the early 1970’s. One of the houses that I regularly worked at was the K-B Baronet when A. Paul Kershner was the manager. At that time, 1970-71, the only concessions were dispensed from machines in the back of the house and, if we were doing good business, they had to be filled during the show as they had to be ready for the next performance. Woe unto the usher that dropped the metal lid of the popcorn hopper during the showing of a feature.
The theatre organ (not the original) was stored back stage and had not yet been installed.
The projection booth was hung on the back of the auditorium like a tree-house and was accessed by a fire exit out of the back of the auditorium next to the concession machines and then up a set of metal stairs that went up to the door to the booth. It was tricky during snow or icy conditions when carrying a couple of film cans.
The K-B front office was adamant that the highest standards be maintained in their theatres but sometimes the bookings were a little strange. During the spring school holiday in 1971 we were scheduled to be open for “Kiddie Matinees” all week showing a different truly lame cartoon feature each day. We had a total of 26 kids on Monday and then the word got out and we didn’t get 25 more kids during the remaining four days. The weekend matinees were “The Wizard of Oz” which I was assured had not been exhibited in the area for several years. We didn’t expect a lot of business. WRONG! When I arrived at 11:00 am Saturday, the line for the still unopened box office went down to the corner of East-West Highway and around the corner for over a hundred feet! It was a amazing! There were children with and without parents, parents with and without kids, teenagers, elderly people, people from the local area and people who had come from the Virginia suburbs and from the district. The exhibition contract limited us to showing only the matinees but it was exciting.

My first “date” was at the Hiser – Jimmy Hildreth and I took the Kurlander twins, Jean and Joan, to see a show I can’t remember on a Saturday afternoon. The Hiser was as described above and had the additional feature of a bowling alley in the basement, accessed from the parking lot at the rear. I think there were maybe three lanes of 10 pins back when Bethesda had 40 lanes of ducks a couple of blocks away.

Mr. Hiser did the right thing and turned the place over to KB in the early 60s. They jazzed it up a little – new carpet, added some concession machines (popcorn) and played some good shows on second run. I saw Psycho, West Side Story and Two Women there. A powerful show – so much so that a male patron passed out during the rape scene while standing in the back – I thought the Coke machine had fallen over.

When I worked for KB I would sometimes pick up some hours at the Baronet. One of the neat features of this design challenged building was the access to the projection booth. I know that projectionists were a strange lot that liked their privacy – they would kind of slip in and out of the Apex without a sound or a nod to anyone. The Baronet must have been heaven for them – you could only get to the booth from the outside of the building. This was really nice in the winter. It seems that projectionist union rules prevented the carrying of film cans to and from the booth. So, it was left to the ushers to take care of this task. One night in the middle of a sleet storm I was told to take two cans to the booth – up the outside iron stairs to the ice covered platform outside the booth. A knock on the door and a hand reaches out for the cans of film, one at a time and that was that.

Back then Bethesda had two movies theaters with a total of two screens. Small time but fun.

The Hiser-Bethesda formally changed its name to the Baronet on 10/28/60. It’s first attraction under the new name was the first-run engagement of THE CAPTAIN’S BOAT.

I grew up in Bethesda and spent many a Saturday at the Hiser Theatre.
Saw King Kong there in the 50s with my cousin Sam twice. My father, a professional photographer, in Bethesda took many photos of Bethesda Chevy Chase during the 30s, 40s, 50s,60s, 70s, 80s. Many of these vintage images are available on the website listed above.There are photos of the Baronet and the Hiser. I believe the old State Theatre is also in one of the images. Many people collect these old images and they make unique gifts and are great for decorating your home and office. Just looking at these images brings back so many memories and wonderful stories.

I was a projectionist at the Baronet in the early 1970s while the regular operator, Fred Kelley, was recovering from health issues. I ran the matinees of Wizard of Oz mentioned above and remember the overflow crowds. The booth had Simplex XL projectors with Peerless Magnarc lamps running 7mm positive and 6mm negative trim. It also had Motiograph magnetic penthouses that were no longer functional. The house lights were controlled by a bank of radial dimmers mounted near the ceiling. I have some pictures somewhere that I’ll try and post. Overall I really enjoyed my time there. That staff was really friendly and occasionally we’d all party together. A regular occurrence was pizza at the Zebra Room down at Wisconsin & Macomb Streets in DC.

I remember going with my family in the early 1960s. On Sunday mornings, they had a British Comedy Series. There would be maybe 10 people in the theatre and my Dad (Canadian) and one other guy would get the jokes. The rest of us were baffled. I was fascinated by the wall paper which featured a pattern of crowns which I guess were there because the theatre was the baronet.

I was surprised to see rlvjr’s comment from 2005 saying “the Blacks targeted Mr. Hiser’s theater for their annoying ‘sit-in’ shakedowns.” That characterization is inappropriate. Hiser shamefully refused to admit African-Americans long after other area theaters had integrated. It was entirely justified and appropriate for people to picket the theater for this.

In later years, after the theater became the Baronet, I remember seeing newsreels and cartoons before the feature. Also old serials as part of weekend matinees. I saw The Sound of Music there during its very long run. The machines in the back were not as appealing as the concession stands at other theaters.