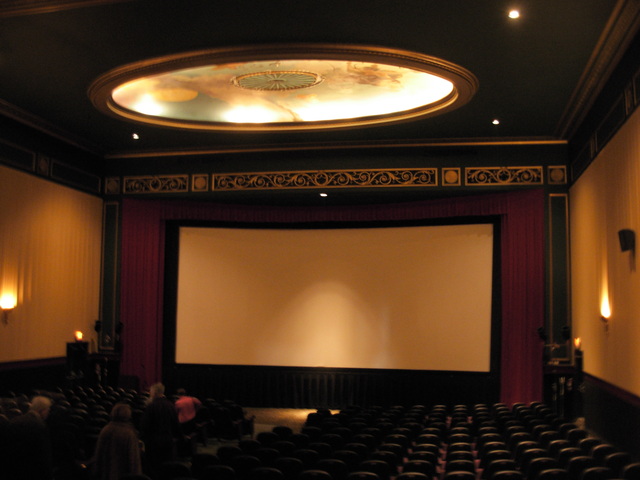 The Avalon Theatre is Washington’s oldest surviving movie house and for decades has been one of its best. The theatres opened around Christmas 1922 as the Chevy Chase Theatre, designed in the Classical Revival style by the local architectural firm of Frank Upman and Percy C. Adams. The theatre opened with more than 1,200 seats on one floor, and had a Robert Morton 3 manual pipe organ. In July 1926, local theatre operator Harry Crandall partnered with Philadelphia’s Stanley Company to purchase the theatre. In 1929, the theatre became part of Stanley Warner, was renamed Avalon Theatre, and was wired for sound movies. The first ‘talkie’ to be shown was George Bancroft in “The Wolf of Wall Street”.

In 1968, the Pedas Brothers purchased the Avalon Theatre and operated it as part of their Circle Theatre chain. A former ballet school upstairs in the building was turned into a 200 seat second auditorium, the Avalon 2, and opened January 26, 1971. During a 1985 renovation, Diana Westring painted a 20 by 30 foot mural for the central dome of the main downstairs auditorium. This mural features the god Mercury casting a reel of film across the sky to a cherub. From the 1980’s the main downstairs theatre had 665 seats.

Loews Cineplex closed the theatre in March 2001 during its bankruptcy reorganization. Projection and sound equipment, movie screen and seats were removed by Loews, over the objection of the owner. Local citizens led by retired librarian Bob Zich organized to save the Avalon Theatre for movies, fearing it might instead become a retail store. They petitioned, fundraised, and organized a non-profit organization, the Avalon Theatre Project, which took over the lease.

GTM Architects donated its architectural services to restore the theatre’s façade and lobby. Some of the façade had been covered over. The historic marquee was discovered hidden under a modernization. Based on historic photographs and documentations, new windows, doors, and ticket booths were installed to resemble their predecessors. The lobby re-emerged with beautiful Neo-Classic style as pilasters and moldings were replaced, the terrazzo floor was repaired, and period light fixtures were installed. The main auditorium’s much beloved ceiling mural was restored (and restored again in 2010). The Avalon Theatre reopened April 22, 2003, once again showing movies! In 2006, the non-profit organization purchased the Avalon Theatre, securing its future.

The Avalon Theatre has been on the DC Inventory of Historic Sites since the mid-1990’s, legally protecting the theatre’s exterior from being altered, though changes can be made to its interior. With photos of the restored lobby and the auditorium and its ceiling mural, the Avalon Theatre is depicted in the 2004 book “Cinema Treasures, A New Look at Classic Movie Theaters”.

In 2013, an elevator to the upstairs auditorium and handicapped accessible restrooms were built. Preparations are being made to celebrate the 100th anniversary of the theatre opening with year-long celebrations commencing in December 2022.

as I recall I think the Swedish version only played at E Street, I could be wrong though. Fincher’s version though really has a great 5.1 soundmix and the 5K photography transferred to 35mm looked equally impressive. Interesting to note that the presentation of Aki Kaurismaki’s ‘Le Havre’ (one of favorite films of this year) is digital – which is odd since E Street’s projected 35mm, I’d be very curious to compare the two since the film in ‘film form’ has striking bold ‘technicolor’ look to it.

holy batman! The presentation of ‘The Dark Knight Rises’ really demonstrated the loudness levels the speakers could handle here at the Avalon – even though the Dolby Digital 5.1 is not lossless audio when compared to sound from digital projection – the bass was powerful and relentless.

on April 28th, the Avalon Double Anniversary Celebration is occurring with the screening of ‘Side by Side’ followed by a post film Q&A with the Washington Post’s Ann Hornaday (and others) to support the theaters transition to digital projection.

saw ‘Renoir’ on screen 1 last night via the new Christie DLP digital projector and it both looked and sounded fantastic. Great brightness, color and the lossless audio complimented and brought out the best of what digital projection can do with a film that is actually shot in 35mm. Technical note: screen one’s projector is upgradable to playback 4K DCP’s and supposedly set up to also feature 7.1 audio (although I wasn’t able to hear ‘Star Trek: Into Darkness’ which did play on screen 1, but was bumped to screen 2 for this week). Screen 2 projector is also a Christie projector; a Solaria One to be exact.

from Avalon email yesterday- On June 24th, the Avalon will begin the project to install elevator access to Avalon 2 as the final project funded by the Avalon Legacy Campaign. In addition, the downstairs and upstairs lobby areas of theater 2 will be renovated, and new, fully accessible bathrooms will replace the existing restrooms.

was at Thursday’s screening of the new Kevin Spacey documentary film with him in attendance and during the Q&A the curtains were used to conceal the screen – with light streaming up, the redness of the curtains was just beautiful – wish I had gotten a picture of that.

My fingers are crossed that the acclaimed Russian film ‘Leviathan’ which is opening later in the month will be shown on screen 1, since Sony is releasing the DCP’s of this in 4K.

This comment is more reference to JodarMovieFan’s comment way back in 2004 in mentioning the HPS-4000 sound system installed for ‘Fantasia’ as a re-release in 1985; and I also remember the Richard Dreyfuss/Emilio Estevez comedy pic ‘Stakeout’ being presented as such here.

What’s interesting in doing research over the system online, is that a variant and progression of the system actually never fully went away but merged and reconfigured to newer digital systems and theaters:

2010: The HPS-4000 theatres at the USS Arizona Memorial at Pearl Harbor are converted to digital cinema. John F. Allen upgrades the sound systems with all new processors as well as amplifiers and personally supervises the soundtrack preparation.

and nearer on the East Coast close to the Washington DC area:

2017 The National Museum of the the United States Marine Corps in Quantico, Virginia opens a new large format theatre. High Performance Stereo is chosen to provide the sound system. John Allen designs a new 15 channel sound system that employs 11 channels behind the 70 by 50 foot screen, plus four surround channels. This marks the first time such a large screen image has had an equally large sound image behind it. This installation has the acoustic power of 36 symphony orchestras and is the most powerful HPS-4000® sound system in the world. https://www.hps4000.com/pages/history_.html

Anyhow, I just thought this was interesting cinematic ‘sound’ history, part of which included the Avalon Theatre.