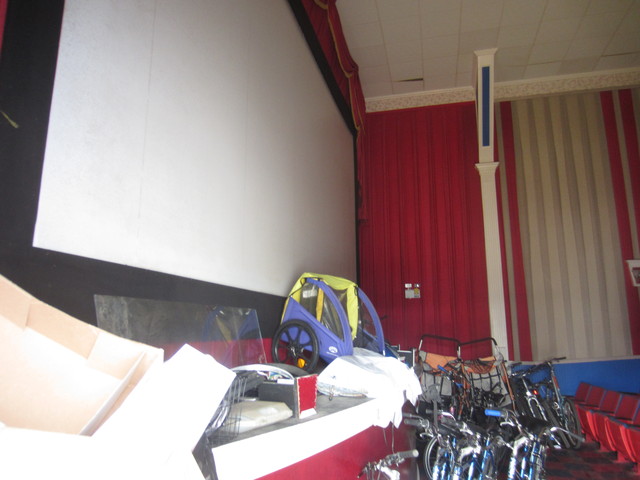 Originally the Oddfellows Hall, the Strand Theatre was opened in 1915. It was remodeled & refurbished in 1939. By 1941 it was operated by Strand Theaters out of Boston, MA. In September 2001, the Strand Theatre appeared to have been recently showing movies and looked as if someone may have had a residence set up in its back portion. It was white stucco and may have had a sheltered ticket booth at one time. It was closed in 2011.

“Strand Theatre” is spelled out above the entrance in individual red faded letters. It also has single glass front movie poster displays on each side of the entrance. In 2013 it was being used as a bicycle hire facility. It reopened June 20, 2015.

My photograph of the STRAND www.flickr.com/photos/lastpictureshow/223301712/

Here are two photos of the Strand from 2003:
EXTERIOR

The Strand is listed in the 1927 Film Daily Yearbook with 500 seats, open 6 days per week. There is also an Eagle Theatre listed for Oak Bluffs.

My photograph, dated July 2012, was taken through the window of a srvice bus(!), so I didn’t have the chance for a proper look at the cinema, but it appeared to be closed (it wasn’t listed in the film section in the free sheet ‘MV Times’).

i was there for 5 days last week. two letters are missing in Strand and there’s the same phone number on this and the Island marquee. I will post pix soon.

King’s Bicycle Rentals is in here now, don’t know if it’s seasonal or what. If you look thru the front doors, there’s tons of bicycles in the lobby, but the snack bar remains unchanged.

To the right side along the road, there are bikes out front and a side door/garage is the sales/service area. I asked if I could go inside the open auditorium doors a few feet to snap a few pix. The boss said no so I compromised, stood at the door, put my camera in and snapped a few. Virtually unchanged, just bicycle storage.

I was there yesterday and the theater has been closed for about 3 years. The young man at King’s Bicycle rental was very nice and walked me in the theater. Since there is no electricity I had to use my flashlight on my I phone. The theater inside is intact and beautiful. They have deco décor and the screen sits on a stage. The seats seem to be in good shape. It would be nice to see this treasure reopen one day. The inside is used for bicycle storage.

MarthasVineyardTheaterFoundation on March 11, 2015 at 5:59 pm

Exciting news: A new nonprofit foundation is 60 percent to its fundraising goal to reopen the Strand, as well as the 102-year-old Capawock Theatre in nearby Vineyard Haven! The deadline is March 31 if the theaters are to reopen by Memorial Day — please share this information with your fellow single-screen aficionados: the secure donation link is at http://www.mvtheaterfoundation.org/take-action/ along with contact info and more photos.

This edition of Skip Finley’s “Oak Bluffs Town Column” in the March 6 issue of the Vinyard Gazzette says that the Strand Theatre was opened by Michael J. Keegan in the former Odd Fellows Hall. Keegan’s Strand Theatre at Oak Bluffs was given a rating of “Good” in the 1922 edition of the Massachusetts Department of Public Safety’s annual report.

Four theaters are listed at Oak Bluffs in The New England Business Directory and Gazetteer for 1918, but the Strand is not among them.

The January 6, 1926, issue of Motion Picture News had an obituary for New Bedford exhibitor Thomas J. Charette, and noted that the Strand in Oak Bluffs was one of the houses he operated.