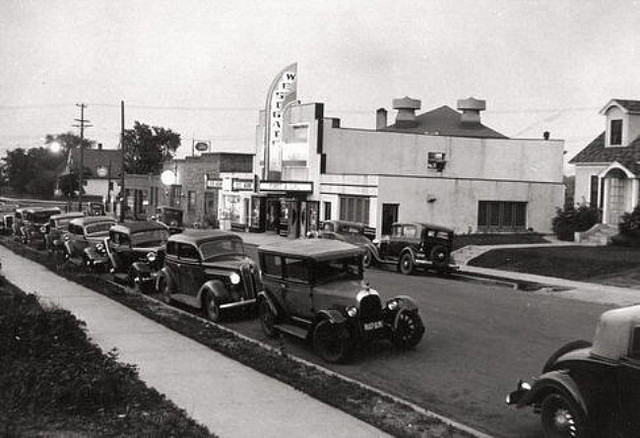 This small neighborhood theatre opened November 15, 1935 with Alice Brady in “Lady Tubbs”. Architect Perry E. Crosier designed the theatre, in association with the architectural firm Liebenberg & Kaplan. It was located in the town of Morningside, which later was annexed by Edina.

One of it’s claims to fame was it showed “Harold and Maude” from mid-1972 to June 1974 for 1,957 showings. Ruth Gordon appeared on stage for the one year anniversary and she and Bud Cort appeared for year two. The Westgate Theatre closed by Mann Theatres on September 13, 1977 with “The Late Show”.

It is now a laundry and drycleaning business. The building, which had large additions built onto it, is whitewashed and nondescript. Anyone who looks at it now, and is unaware of its history, would likely never guess that part of it had once been a movie theater. The only visual clue to its past, if you know what you’re looking for, is a distinctive, elevated ‘art moderne’ shape to one end of the otherwise flat roofline where the long-gone marquee once was.

Some current pictures of the onetime Westgate Theatre:
http://www.cinematour.com/tour/us/19802.html

The theater’s marquee and sign are visible in the background of this 1956 image:
http://tinyurl.com/ye8ho4

The Westgate Theater opened near the corner of Sunnyside and France Avenue in 1935. The owner, Carl Fust, a retired life insurance salesman who once traveled Europe as a professional violinist with the Minneapolis Symphony, conducted the orchestra that night. Although the Westgate stood less than a mile away from the successful Edina Theater, which opened just the year before at 50th and France, Fust had no worries about the competition because like Fust, people went to the movies every Friday night. Admission was 25 cents. Movies were America’s most popular form of entertainment. Fust’s “retirement project” used architect Perry Crosier of Liebenberg and Kaplan, the same architectural firm that designed the Edina Theater, to create an Art Deco streamlined design. Although much smaller (seating 500 compared to the Edina’s 1000), the Westgate included air conditioning, high fidelity sound, modern décor, and a club and bridge room with catering service. Unfortunately, Fust learned he couldn’t compete with Edina Theater’s monopoly on high-rated movies so “our attendance was not very good,” wrote his daughter Margaret Delin in her memoirs. Fust didn’t have the chance to fight the system. After what seemed to be a minor car crash in the fall of 1937, his health failed due to undiagnosed internal bleeding, and he died in March 1938, and the Edina Theater owners Issie and Ben Friedman bought the Westgate. For some, the big attraction wasn’t the main features but the weekly serials, installments of Charlie Chan, Batman and Buck Rogers. One young fan worked as an usher at the Westgate for 35 cents an hour, including a uniform and free admission, popcorn and candy. John Hurley, top manager for both theaters, offered him work at the Edina as well as the Westgate and, during World War II, took on more responsibility as his male co-workers shipped out for military duty. Newsreels updated moviegoers on the war before every feature, and Westgate manager Howard Hinton chain-smoked as he worried about keeping his 16-year-old son out of the war, and sold war bonds and emceed raffles for dishes, cigarettes and bank nights, a raffle drawing for a check. He delivered weekend cash receipts for both theaters by streetcar to the Lake and Hennepin Northwestern National Bank in brown paper lunch bags with thousands of dollars in bills and coins. In the late 1940s, the library saw more customers than the theater did on many days, recalled a former manager who was used to bigger theater crowds in his native Pittsburgh, and was surprised to see no one in the audience on New Year’s Eve 1946, his first night on the job. Only he and his new wife, and her parents sat in the audience minutes before the first show. “Should we cancel?” he asked the projectionist. The projectionist urged him to wait, and perhaps nine people eventually showed. The theater provided a quiet haven for Morningside’s lone police officer, who patrolled the streets until he retired at age 83. When he needed a rest, he’d sit in the darkened theater and told the manager to get him if his wife (who answered police calls at home) wanted him. The Westgate Theater continued on, but didn’t achieve big audiences until the 1970s with “Harold and Maude”. The dark comedy opened in mid-1972 at the Westgate Theater, and no one in the audience suspected that they’d have another 1,956 opportunities to see the popular film that achieved a cult following. For over two years, “Harold and Maude” played at the Westgate. By the beginning of the third year, disgruntled neighborhood residents picketed the theater with signs reading “Our plea to Westgate. Your neighbors want variety” and “Two Years Too Much.” The record-breaking run of “Harold and Maude” brought it and the stars Ruth Gordon and Bud Cort national acclaim. Cort said later that the Minnesota run would boost his career. Both stars visited the Westgate Theater. Ruth Gordon attended the first anniversary showing, and both came for the second anniversary, as picketing continued. The movie played for a total of 1,957 showings from mid-1972 until June 1974, setting a new record for number of showings for any movies in the Twin Cities. “The Rocky Horror Picture Show” would break that record in the late 1970s, but the Westgate began the strategy of finding a market to stay alive in a time when multiplex theaters took most of the movie business from small single-screen operations like Westgate. The Westgate experienced several reports that it was closing after “Harold and Maude” ended. An Edina Sun headline on August 10, 1977 read “Was W estgate’s ‘death’ greatly exaggerated?” “The Westgate Theater, scheduled to close in July ‘is open and running,’ said the General Cinema Corp. division manager in Minneapolis. He and a Boston-based General Cinema Corp. official denied earlier reports of the proposed closing. Eventually, he said he theater’s future was in doubt. Soon, though, the Westgate, though playing such top billings as ‘Silver Streak’ and ‘Annie Hall’ was scheduled to close along with the Suburban World and two of St. Paul’s three downtown theatres, apparently due to lack of profits. In fact, the theater did close later in 1977. Today, the theater building is home to the Edina Cleaners & Launderers. The marquee is gone, and the building has been remodeled and expanded, but the lines of the original building still can be seen.

A photo of the front of the Westgate Theatre appears in the lower right corner of this page of the August 21, 1937, issue of Boxoffice. A photo of the auditorium appears on the subsequent page.

They told the newspapers they weren’t going to close it in August, but they closed it in September. The date was 9-13-77 and the last show was “The Late Show”. It opened 11-15-35 with “Lady Tubbs” starring Alice Brady, with a Hollywood Snapshots short, newsreel, musical short and cartoon “Make Believe Revue.” Admission was 25 cents; 20 cents for matinees. For most of the 1950s it was called “Westgate Academy Arts” and the theatre had a mailing list; theatre began to play art in 1951 and was criticized in the trade for getting art product on a 28-day clearance on a split week, and the other half of the week it was playing Hollywood product at its usual 56-day run. Dabbling in art continued for most of the 1950s, and when playing Hollywood films it was usually the higher brow pictures. (Another name used for a time was “Westgate Playhouse”) By the late 60’s it was playing mostly second runs but there was an emphasis on occasional eclectic programming, or moveovers of art house hits. Some repertory titles were shown in the theatre’s last decade but these were sprinkled here and there with no consistency. The “Harold and Maude” run was 3-22-72 to 5-30-74. A January 1974 newspaper article said that the film was about to break the 95-week record held by “The Sound of Music” at the Mann [Pantages] Theatre and that 160,000 tickets to “Harold and Maude” had been sold up to that time.

Should also mention here that this was not the first run of “Harold and Maude” in Mpls.-St. Paul. The first run was at the Mpls. World Theatre in Dec. 1971. It had a few other runs before landing at the Westgate, which is where it finally began to click with audiences.

I was an usher at the Westgate Theater during 1951 with my friend George Anderson, who helped me get a job there. Howard Hinton was the Manager. I had grown up in Edina from 1944 to 1950 and our family went there quite often. During my grade school days at Wooddale School we would take our first girl friends there for a movie. A fond memory of another time long ago. A nice little theater and well managed.

no ad was bought.