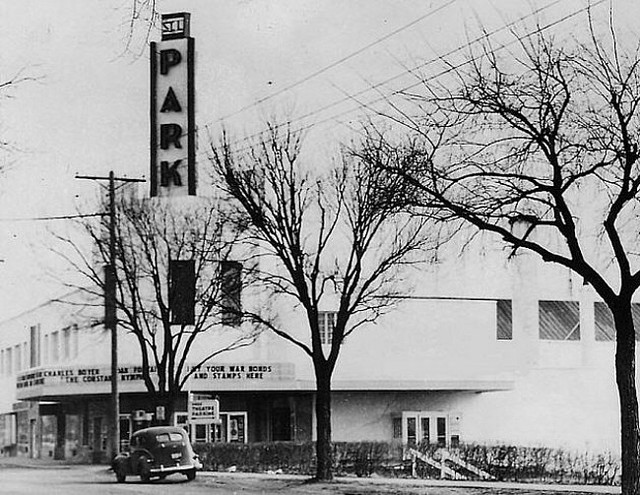 The St. Louis Park Theatre opened May 10, 1939, in the Minneapolis suburb for which the theater was named. Costing over $100,000 to construct, and designed by architect Perry E. Crosier in elegant Art Moderne style resembling more a sleek, sophisticated downtown nightclub of the era than a neighborhood movie house. It was one of the first theatres in the Twin Cities suburbs to allow smoking.

In 1957, the theatre was modernized, including the addition of 70mm projection equipment, only the second theatre in the state to do so, after the Academy Theatre downtown. In 1963, Mann Theatres took over the theatre, and on December 21, 1965, the St. Louis Park Theatre again was remodeled, this time for the addition of Cinerama, with “The Battle of the Bulge”.

During the rest of the 1960’s and well into the 1970’s, the St. Louis Park Theatre remained one of the main road-show format houses of the Twin Cities area. However, after a nearly 60-week run of “Star Wars”, the theatre closed in 1980. The auditorium was demolished, and the lobby space converted into retail space.

Here is a photo being advertised on eBay:
http://tinyurl.com/2tp7ju

That photo dates from 1943. The feature playing was “The Constant Nymph” with Charles Boyer, Joan Fontaine.

The description says that the auditorium of this theater has been demolished. If that’s so, the status field should be changed to match.

The St Louis Park Theatre was featured in an article in Boxoffice of May 5, 1958. There are several photos of the house on this page and the two subsequent pages.

The theater had reopened on November 8, 1957, after a remodeling and redecoration, which had included some structural changes. The architect for the project was John Field, of the San Francisco firm Knorr, Elliot & Associates. Field was the son of the theater’s owner, Harold D. Field. The caption of one photo gives the seating capacity of the remodeled house as 960.

I was there opening night for Star Wars on May 25, 1977. We came for the 7:00 show and they had already sold out that one and the 9:00 showing as well. We had to go back the next day — much earlier, needless to say. When we got there the line had filled the lobby and had just come out the front door. We jumped in and in less than five minutes the line behind us had looped the entire building.

I grew up in St.Louis Park from 1950-1955. The theater had a sunken lounge and was well maintained. I was an Usher there in 1952 with my friend Bruce Patterson and his brother Bud, who was Assistant Manager. We wore uniforms of Maroon with gold trim. Polished shoes were a must to keep your job! Saw some of the greatest films there on that large screen. Fond memories of a time when life was much simpler and graceful. Young folks today do not know what they missed.

CharlesB, my best friends father worked at Loew’s State in St. Louis while in high school and his hourly wage was 72 and a half cents per hour. Do you recall what your were paid by the hour?

This opened on May 10th, 1939 and the Cinerama reopening on December 21st, 1965. Both grand opening ads in the photo section.