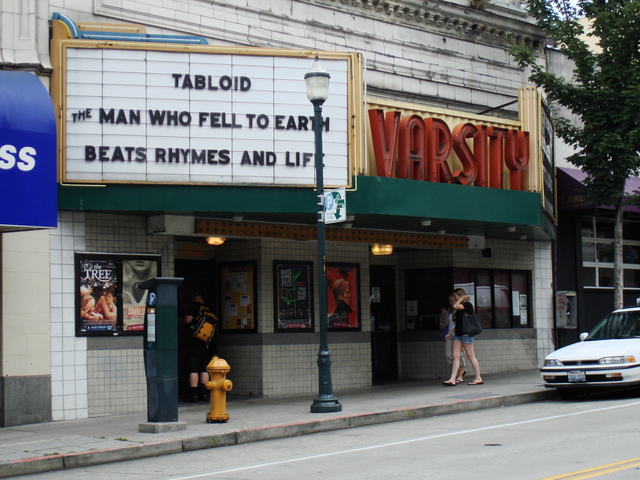 Opened in 1940, in September of 2003 I found the Varsity Theatre to be open and busy showing movies. It was situated in the Meister building which was built in 1921 to the designs of architect William White. “Varsity” was spelled out in red letters with a yellow background in between twin marquees that extended out from the building at an angle.

Operated by Landmark Theatres (USA), it was taken over by Far Away Entertainment in January 2015.

A little history from the Varsity’s Web site:

The Varsity has been operating as a movie theatre since 1940. Since there was no room to build outward, the theatre was expanded vertically with the addition of two upstairs screens in 1985. These smaller auditoriums feature high-back ultra-cushy seats with large wall-to-wall screens.

Listed in Film Daily Yearbook, 1950 edition, as having a seating capacity of 471 when it was a single screen.

My image of the VARSITY
www.flickr.com/photos/lastpictureshow/261191581

The Meister Building was built in 1921, according to this historical site summary from the City of Seattle’s Department of Neighborhoods. The original architect of the building was William White. The expansion and conversion of the building into the Varsity Theatre took place in 1940, and was designed by theater architect Bjarne Moe.

The Varsity got an updating in the mid-1950s, which was handled by the B. F. Shearer Company. Boxoffice of October 22, 1955, featured a two-page article about the project, starting here.

Landmark will be pulling out of the Varsity in January but the property owners are in talks with “an established operator”. Still 35mm got the early run of Interstellar as a result.