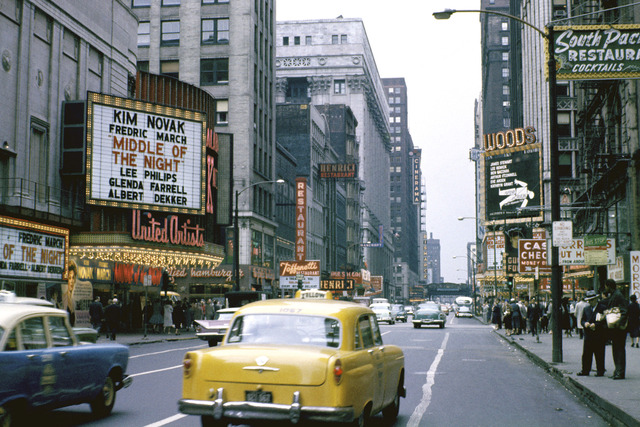 The Apollo Theatre was opened in 1921 as a legitimate playhouse in the Neo-Classical style by Chicago architectural firm of Holibard and Roche, better known for their office buildings (they also designed the massive Neo-Classical style Chicago City Hall and Cook County Building just around the corner from where the UA once stood on W. Randolph Street). The theatre was built for A.H. Woods, the showman whose self-named theatre sat on the opposite corner from the Apollo Theatre.

The auditorium’s ceiling featured a cove-lit dome, encircled by ten smaller portholes. The lobby had a slightly Middle Eastern flavor, complete with polychrome plasterwork, black marble walls, hand-painted tiles in the lounges, and a carpeting pattern based on one from a 19th Century Ottoman palace in Turkey.

The theatre was taken over by the Balaban & Katz chain in April 1929, which would soon operate the majority of the Loop’s movie houses. Balaban & Katz operated the United Artists Theatre into the 1960’s. Afterwards, B & K’s successor chains, ABC/Great States and then Plitt Theatres ran the United Artists. For its last couple years of operation, during the mid-to-late-1980’s, it was part of the Cineplex-Odeon chain.

By the 1960’s, much of the original decor was either gone or heavily remodeled. In early-1988, this once-attractive theatre was shuttered and demolished two years later.

Not only was the United Artists Theatre razed, but by 1991, every structure on the block–including the Roosevelt Theatre around the corner on State Street, the late-19th century McCarthy and Unity Buildings, and various other buildings–except an Art Moderne 1930s-era Commonwealth Edison substation at the corner of Dearborn Street and Washington Street–was wiped away. The razing was in preparation for a huge office and retail complex to be designed by famed architect Helmut Jahn that never materialized. The site, called “Block 37”, remained vacant for almost twenty years. with several plans for its redevelopment having come and gone.

By 2012, the site is now occupied by the mostly vacant Block 37 Mall, and the studios of Channel 2, CBS' Chicago affiliate.

The much maligned Block 37 has been completely developed and also includes a mainstream movie theatre, the AMC Dine In Block 37.

YouTube link with footage from November-December 1978 that shows the United Artists Theatre beginning at the 2:46 mark. It shows “Blackjack” with an added feature of “The Black Godfather” from 1974, which does not appear on the master list of film presentations on page 5 of the comments. The Oriental Theatre is seen as well.

I thought this was in the gallery but it wasn’t. Underside of the United Artists marquee. 1/17/64-2/20/64 photo credit Jeanette Williams via Flickr link below.

Painting on Flickr.
Some artistic license as that film came out 2 years after the United Artists was demolished.