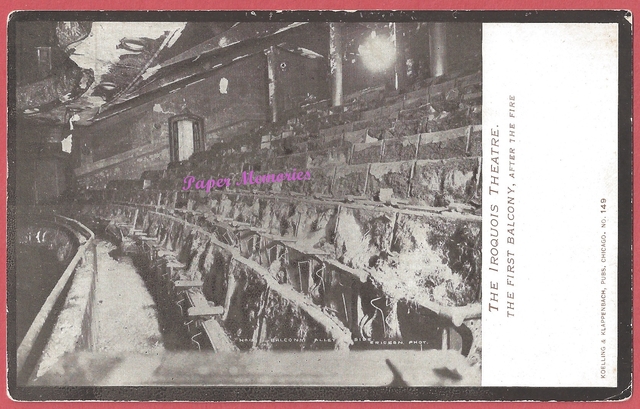 Opened in November 1903, the Iroquois Theatre was designed by Benjamin Howard Marshall, who also designed the Illinois Theatre, and would later design the Blackstone Theatre (today the Merle Reskin Theatre) with future partner Charles Eli Fox. It, like most of the legitimate houses of the day, was designed in the Beaux-Arts style, made popular by the World’s Columbian Exposition in Chicago a decade earlier. The interior was advertised in newspapers as "a temple of beauty" as well as being "absolutely fireproof", with an asbestos fire curtain.

On December 30, 1903, a month and a half after the Iroquois Theatre opened, comedian Eddie Foy was appearing onstage in the smash musical comedy "Mr. Bluebeard" to a standing-room only crowd of almost 1,900. Painted canvas backdrops backstage placed too close to a spotlight caught on fire, quickly spreading to the stage area itself just as Foy was starting the second act. In a panic, those on stage rushed out the stage door, letting in a blast of air, which only fed the fire more, causing it to jump into the auditorium itself, quickly reaching to the balconies.

The asbestos curtain somehow jammed halfway down, leaving the theatre to the mercy of the blaze. Despite Foy’s pleas to the panicked crowd to stay calm and that the situation was under control, patrons ran to the exits in throngs only to find the doors opened inwards, and many were bolted shut from the outside.

Many people were trampled to death, as well as leaping to their deaths from the balconies or from fire escapes three or four floors above W. Randolph Street.

By the time it was all over, more than 600 men, women and children had perished in the blaze, making it the worst disaster in Chicago’s history, inflicting a greater death toll than the Great Chicago Fire of 1871, in which about 250 died.

Though the auditorium was heavily damaged by the fire, the Iroquois Theatre was structurally sound, and was rebuilt and reopened less than a year later, as Hyde and Behman’s Music Hall, which presented vaudeville. In 1905, the theatre became the Colonial Theatre, which was, like the Iroquois Theatre, a legitimate playhouse.

In 1913, the Colonial Theatre was acquired from the Klaw & Erlanger theatrical circuit by the Jones, Linick, & Schaefer circuit, which operated it as a vaudeville and movie theatre.

The Colonial Theatre was razed in May 1924 to make way for the United Masonic Temple building, which also housed the Oriental Theatre, which, after a long period of inactivity, is once again open, as a live theatrical venue.

Never on a regular basis. But last I checked, cinema treasures accepted submissions of such theaters anyway.

The Hyde & Behman’s New Music Hall photo posted by Broan on February 10, 2011 is actually a 1904 photo. Not 1874 as is printed on it. It was mislabeled as 1874 years back in several publications. Hyde & Behman’s New Music Hall pictured went into the former Iroquois Theatre building after the 1903 fire. It then became the Colonial Theatre in 1905. The Masonic Temple building in the upper right hand corner of the photo was built in 1892. The Oliver Typewriter Building would be built in the vacant lot to the left of the corner building in 1907/`08.

I thought the date of 1874 just referred to the date the Delaware Building on the corner was completed, since the photo is really about the Delaware, not the Colonial Theatre. Perhaps if “1874” was inside the parentheses there would be no confusion.

Correct, the year of completion of the Delaware Building was 1874. But it does not clarify that. Maybe it did in other copy that accompanied the photo in it’s original source. But it also says Northwest corner, and it is clearly the Northeast corner pictured.

There certainly is a lot of confusion in this world. And then a good chunk of the Delaware was destroyed for construction of the new Masonic Temple Building/Oriental Theatre in 1924. Viewing it both before and after 1924, one might think it to be two different buildings. Crazy.

Yes, more confusion. Two Masonic Temple Buildings too… The 1904 photo does say Vaudeville on the back of the Hyde & Behman’s wall. Which would have no longer been visibkle once the Oliver Typewriter Building went up in 1907/`08.

Link for the show that opened circa September 1905, coincides with photo just added.