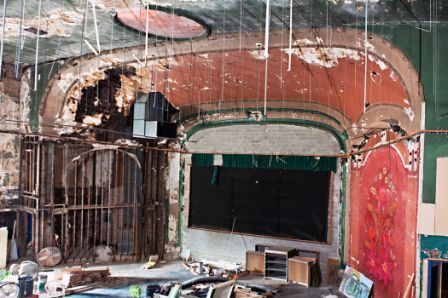 Opened as the Remington Theatre on May 15, 1912 it had a seating capacity of 1,200, located on orchestra, mezzannine box seats and two balconies. There was a dance floor on the second floor and a rooftop garden. It was decorated in a Louis XVI style. Five months after opening, the Remington Theatre burnt down on October 12, 1912.

It was re-built to the plans of architectural firm, Rapp & Rapp and re-opened on November 13, 1913, but soon closed. It re-opened in 1915 as the Majestic Theatre and continued as a major theatre of the town for many years, finally closing in 1957.

The stage area was re-developed into a retail developement known as Majestic Mall. In 1970 the theatre re-opened as the Town Theatre and from December 1990 it was leased from Kerasotes Theatres by Classic Cinemas. Classic closed the Town Cinema in March 1991 to concentrate on their Paramount Theatre.

In June 2009, it was announced that the former Majestic Theatre would be restored as an arts and conference center. Adam Meyer of Meyer Construction, Tom Shamblin of Shamblin Insurance and Tim and Karen Schmidt of Majestic Enterprises and Lydia and Groucho’s coffee shop/deli, have saved, designed and are now in the midst of remodeling the theatre for new generations to come.

Completed and reopened in July 2012, the New Majestic Arts and Conference Center consists of a stage, high tech sound for plays and concerts, power point and wi-fi system for business meetings. There is a 20 foot screen, a balcony, seating for about 250 and a new marquee. The auditorium is available for meetings, retreats, lectures, concerts, comics, plays, fundraisers and private parties.

The Majestic Theater was a second-run theater for most of its existence. The Paramount Theater, half a block to the North on Schuyler, would usually get the first-run major movies, play them for one or two weeks, then move them over to the Majestic. The Majestic would often pair the major film then with a grade-b film.
Occasionally the Majestic would score a major movie When the Paramount hung on to a huge hit movie beyond two weeks.
I spent many of my youthful years at one or the other of these theaters during the 1940s.
Admission then was 12 cents (10 cents plus 20% war-time luxury tax).
12 years old and up paid the “adult” price of 18 cents (15 + 3).
The Luna Theater 238 S Schuyler Ave. at that time ran grade-c films.

As with Meredith Rhule in the above post, my first full-time job as a projectionist was in Kankakee seven years earlier than his. I left in 1974 to go to Radio City Music Hall. When I started in Kankakee in 1967 the Majestic was closed, and the Luna was still open. In fact, I was originally told by the business agent that he wanted me for the Luna, but after the operators there saw the Meadowview, which was just about to open, they decided to stay at the Luna. A few years later, the Majestic building was converted into a mini mall, and the balcony of the Majestic was sealed and it became the Town Cinema, with the backstage space being converted to shops or offices. The theatre had a variety of projection booths. The original one, according to the B.A. was on the roof of the building next door, until the owner of the building told the Majestic management to get it off his building. Then it was moved to the roof of the Majestic, and to get to it you had to go out on the fire escape and go up a ladder. The B.A. told me that they kept a ladder in the booth, and when the weather was very bad outside, they would lower it out the spot port and climb out the window and down into the balcony. He also told me that since they were projecting through space in the ceiling beams, the theatre could never show CinemaScope films. I was in that booth once during the construction to convert the space into the Town Cinema and the equipment was still up there intact. The last booth for the Town was carved out of the former lobby access space to the balcony. The equipment was taken out of the Luna and moved over, and then the Luna was torn down.

Robert, as your replacement at the Town Cinema in 1974, I must commend you on keeping the booth clean for me. HA! By the way, I did go up to the roof and popped the lock on the door at the old booth. Everything from slippers on the floor to bottles in the medicine cabinet were still in place. I also crawled around the old balcony. Pretty erie stuff, to say the least. If I had known you were still at RCMH, I would have stopped by to swap stories about Ma, Oscar, Jim, Richard, Jerry and the rest of the gang. I came to NY in 2002.

So do you rememeber Sarah Gerard

hehehe. I was not allowed to call her Sarah or Ms. Gerard. Nope, I could only call her, “Ma.”

Also, she was one of the best people I have ever worked for. Sarah Gerard, Ma, was a lovely lady…

http://www.k3majestictheatre.com. The Majestic Theatre in Kankakee is back in business. This is their website, and of course they have a Facebook page, too.

The January 11, 1913, issue of Construction News had an item saying that C.W. and George L. Rapp were drawing plans for a fireproof theater on Schuyler Avenue in Kankakee for Mrs. Julia Remington. It didn’t say anything about the house being a replacement for a burned theater, but I’ve found nothing about Mrs. Remington building any other theaters at that time, so the Rapp & Rapp project was most likely the rebuilding of this theater.