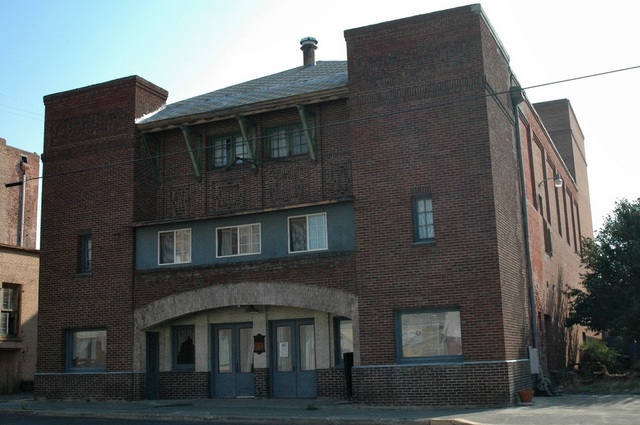 The 713 seat Seeley Theatre opened November 24, 1913 for stage shows, vaudeville and the new silent movies. It became the only motion picture house in Pomeroy. In the early-1950’s the original box seats in the auditorium were removed to accommodate a larger CinemaScope screen. Later in the 1960’s, the lobby was given a more modern look and the old stage area, long out of use was walled off to house a refrigeration and repair shop. The Seeley Theatre returned to live performances and hosted shows produced by the Civic Theatre group.

Listed at the Seeley Theatre today is the Actor’s Trunk, which is open featuring vintage movie and theatre memorabilia as well as screening movies. This historic theatre has many unique features, including it’s own ghost.

In the fall of 2004 a troop of actors from Harper Joy Theatre at Whitman College toured to the Seeley with a production of Julie Jensen’s “Wait!” Ms. Jensen, who had been in residence at Harper Joy, was present. Her play takes place in a small town, not unlike Pomeroy, WA, in a delapidated theatre, not unlike the Seeley, where a production of “Hamlet” is being given to raise funds for the restoration of the theatre. The performance of “Wait!” that day was given as a benefit to raise funds for the restoration of the Seeley. Unfortunately, only a small group of Pomeroy’s citizens attended the performance and so very little money was raised. It was a pitty as the Seeley deserves to be saved. As one walks through the dank dressing rooms, down into the orchestra pit, across the stage, in and amongst scenic elements leaning sadly against backstage walls, up into the balcony where ancient props and lighting instruments are strewn, into the booth where the battered projection equipment waits patiently to beam the next Saturday afternoon serial onto the torn silver screen, one can absolutely feel the presence of movie ghosts, of actors, singers, dancers and the audience with whom they shared their energy—dare one say magic—all the way back to 1913. The little audience that watched “Wait! that day in 2004, sitting in an unlit, unheated auditorium watching young student actors walking on boards older than their grandparents, cheered as loudly as their numbers would allow. Those young actors felt the magic of that place and perhaps for the first time, the direct connection every living actor has to those who have gone before.

In 2004 a lone young man was doing all the restoration work on the Seeley by himself. If you happen to pass through Pomeroy (which is on the highway between Lewiston and Walla Walla), stop by and spend some time and few dollars at the Seeley. It really deserves to be treasured.

The Seeley Theatre was designed by Seattle architect E. W. Houghton, according to data compiled for the NRHP nomination for the Downtown Pomeroy Historic District.

The website is out of date, but current listings are on their Facebook page. Function should be: Open/Renovating.