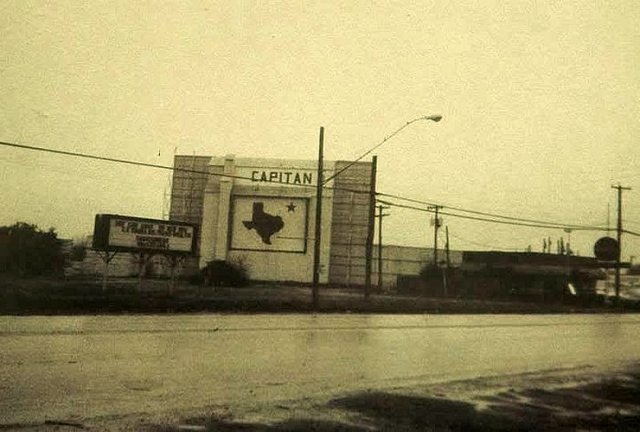 The Bluebonnet Drive-In was opened on October 28, 1950 with Yvonne DeCarlo in “The Gal who Took the West” & Howard Duff in “Johnny Stool Pigeon”. It was located on Highway 90 at 36th Street. In 1953 it was renamed El Capitan Drive-In and was operated by Tom Summers, screening Spanish language movies. It had a capacity for 570 cars and 250 seats for walk-in patrons. It was closed in 1978.

Was told that there was a mural before it was changed to El Capitan from the original name “The Bluebonnet Drive-In”, which depicted a neon bluebonnet on the screen mural. Have never seen pictures but hopefully someday we will.

The Capitan was located at the corner of Old Highway 90 West and 36th Street. It was one of the few older drive ins that had a full CinemaScope width screen added on after the advent on the CS format. The Capitan was opened as the Bluebonnet in 1951, and was changed to the El Capitan a few years later, then the name just became the Capitan. The drive in did good business, and REALLY did well in the early 70s when Kung Fu/Karate movies started coming to this country. I worked at the Capitan during this time, and for one full year we ran nothing but Kung Fu movies. The Capitan was sold to a real estate developer in the late 70s and was closed. With the exception of a Valero corner store that stands where the driveway entrance once was, there’s nothing but weeds and trees where this wonderful old drive in once entertained people on San Antonio’s west side.

Here is an undated photo of the Capitan:
http://tinyurl.com/ysh6ym

There is a really nice new elementary school at the site of the old Capitan Drive In Theatre now.

The Capitan was opened as the Bluebonnet

From Billboard, May 15, 1954: “Tom Sumners has purchased El Capitan Drive-In, San Antonio, his first drive-in operation. He operates the Laurel, Josephine and Woodlawn theaters. Sumners plans to continue the present double feature policy at the El Capitan – one Spanish language and one English language film.”