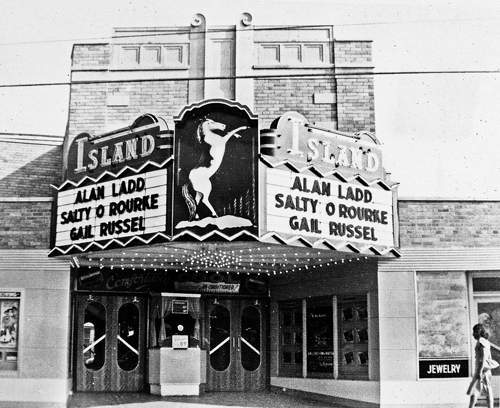 The Island Roxy Theatre was opened in 1945 and was designed in the Art Deco style. The Island Roxy Theatre held the premiere of the movie “Misty” starring David Ladd on June 4, 1961 and Misty’s hoof prints were set in the concrete sidewalk in front of the box office. The original fabric on the walls joins the impressive interior with the original green and pink terrazzo in the lobby.

That one seems to work on and off. Here is the same photo:
http://tinyurl.com/l3et5n

I guess since we’re not their friends they make it more difficult.

Here is an update on the recent status:

For several days around Xmas this year (2018), The Island Theatre played free holiday movies like the 1944 White Christmas(with Danny Kaye & Bing Crosby) and even free double features. Snacks were on sale in it’s lobby and a great time had by all. They show 1st run movies during the busy summer season.

Of course the Island Theatre isn’t showing films right now due to the regulations imposed by the Governor of Virginia due to Covid-19. Hopefully, it will only be another week or two from today. You can call them at 757.336.6109 if you like.

FYI, the link in Mike (saps) on August 7, 2007 comment still works and the pictures are exactly like the Chincoteague Island theater looks like inside. It’s beautiful inside.

There’s an error in this theater’s description. The Movie Misty, which was released in 1961, could not have been the opening night feature at the Island Theatre, but the movie was premiered there. The 1947 book on which it was based was called Misty of Chincoteague, and the movie filmed in the area. The real Misty was still living at the time of the premier, and that was when her hoofprints were set in cement in front of the theater.