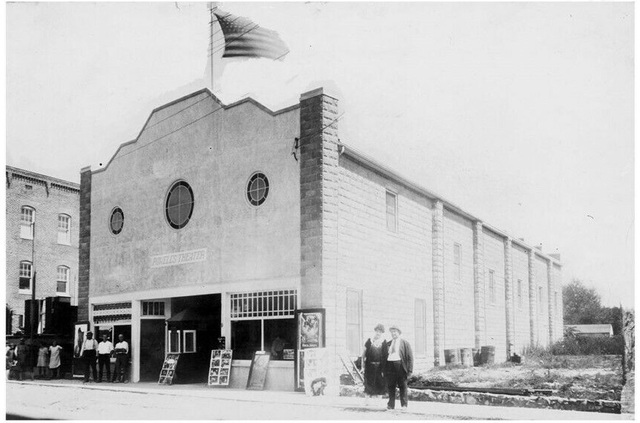 The address is that of a building called the Village Mall. Function should be retail.

Chincoteague is represented in the 1914-1915 American Motion Picture Directory only by the listing “M. P. Theatre,” but item number 10 in a walking tour of Chincoteague (PDF here) is listed as the “Old Powell Opera House and Theater,” 4098 Main Street, built by James T. Powell in 1909.

The December 25, 1926 issue of Exhibitors Herald mentioned “Powell, J. T., Powell’s Theatre, Chicoteague Island, Va.” as a participant in a survey the magazine had conducted that year, so the theater must have still been open for at least part of 1926.

And, for what it’s worth, the July 3, 1948 issue of Motion Picture Herald had this item:

“Down on the Eastern Shore

“Marsh Gollner reports that Shore Amusements Inc., have acquired the Powell and New theatres at Chincoteague, down on the eastern shore of Maryland. Marsh is credited with having consummated the deal.”It’s possible (even likely) that the houses Shore bought in 1948 were the the Island and the New, but the magazine mistakenly gave the name of the seller as the name of the first theater.

It’s now looking like the Powell operated well past the 1920s. The Library of Virginia has a document titled “A Guide to the Records of the Division of Motion Picture Censorship, 1926-1968” (text file here) and it mentions both the New Theatre in 1958 and a house called the New Powell Theatre in 1957-1958. There’s no evidence that the New ever had the aka New Powell, so it looks like the Powell was open into the 1950s.

There is also a brief passage in a book called Chincoteague Summer of 1948: A Waterman’s Childhood Stories by Ed Waterhouse, which says that the Powell and the New were both in operation in the 1940s, though the credibility of this source is somewhat diminished by the repeated misspelling of the name Powell as Pawell. Probably more reliable is an oral history interview of Anne Lumley Davis (PDF here) who moved to Chincoteague at the age of 13 in the mid-1940s, and who says that all three theaters, the Powell, the Island, and the New, were in operation during that period.