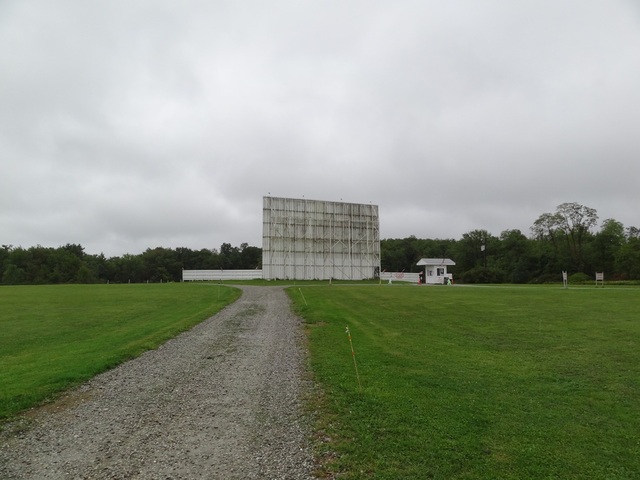 The Mayfield Road Drive-In opened in 1945 and remains open today. It has a capacity for 350 cars.

The Mayfield Road Drive-In has made the conversion to digital projection, Their officeial website

A commenter on the Mayfield Road web site says that it used to be known as the Hazelwood. That checks out.

The 1948-50 Theatre Catalog drive-in lists did not include anything from Chardon nor any Hazelwood in the Cleveland territory. The 1952 Theatre Catalog listed Chardon’s Hazelwood, Exec: R. H. Manley and H. Horstemeier. (That’s Herbert H. Horstemeier of H.H.H. Enterprises, who bought Coshocton’s Tri-Vale Drive-In in early 1956 just a few months after it opened.) The 1955-56 edition changed the Hazelwood Exec to C. Brinkman and Cooperative Ths. of Ohio.

The Motion Picture Almanac lists in 1952-54 included two drive-ins in Chardon, the Chardon Skyway and the Hazelwood, both owned or booked by the Ohio Theatre Service. In the 1955-61 editions, only the Hazelwood was left, run by V. A. Nelson, then in the 1963-66 editions by Carl Brinkman.

It was definitely known as the Mayfield Road in 1972 when it was sued over a carbon monoxide mishap the year before. In 1976, a jury in Cleveland cleared the drive-in of responsibility for the incident.

That Maisano who owned the Mayfield Road in the 1980s (at least) is probably at least related to Peter Maisano, its manager in 1972 who was named in that unsuccessful lawsuit.

The Geauga County Maple Leaf wrote in 2016 that John Knepp had owned the drive-in since 1993. “Previous to Knepp, it was owned by the Maisano family.”

Also, in 1993, the original screen was lost to a wind storm. Before or after the sale, I wonder.

Finally, even though everyone says the Mayfield Road opened in 1945, nobody says what day or even that it was the Hazelwood back then. On the other hand, I’ve got no independent verification that it existed before 1950 or so, and the typically accurate Theatre Catalogs don’t have it any earlier. Just sayin'.

Please add a note that this was once known as the Hazelwood Drive-In.

The June 25, 1953 Chadron Record included an ad that mentioned “GOODBYE MOSQUITOES! / The Hazelwood Drive-In Is Now Being Fogged Each Night For Mosquitoes. / WATCH US KILL THEM”

That was still its name in 1962, per this article in the June 25, 1962 issue of Boxoffice about Mr. and Mrs. Carl Brinkman’s sale of the indoor Geauga to Chardon Theatre Enterprises. “Brinkman, retiring owner and manager … will continue to operate the Hazelwood Drive-In which was not sold.”

Here’s the link to an August 15, 2013 article from the Geauga County Maple Leaf on the drive-in’s transition to digital projection: