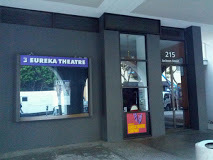 The Gateway Cinema opened November 15, 1967 and successfully showcased art, independent, classic, and foreign language films. This small movie theater, it was built as part of the massive Golden Gateway urban planned community at a time when “cities within cities” were in vogue. The complex also boasted several highrise apartment buildings, a supermarket, post office, town homes, parking and office buildings.

It was closed in 1998 and in 1999, the cinema was renamed the Eureka Theater and it now is home to live theater and entertainment acts. After its transformation, this theater introduced the play “Angels in America” by Larry Kramer, which has since been made into a motion picture.

I recall seeing two films here in the past—Hard Boiled(US premier) and Henry:Portrait of A Serial Killer. The Gateway was run as an independent as a movie house most of its life(I believe Landmark did run it towards the end for a few years). In its earlier days, it shared bookings with the Cinema(aka Fine Arts) in Berkeley.

Tillmany(who posts on here on occasion) did manage the theater at one point and would probably know a lot more details.

Hi scottfavareille and lostmemory… I did not know the Eureka Theater Company had such an ambitious schedule. I could not find their website, and glad to see you found it. Great! I saw the first run of Woody Allen’s “Bullets Over Broadway” at this theater in 1994, and was told that Woody loved having his films shown at this cinema. I have not been back to S.F. in a few years and must make a point to see a live production here. Thanks.

The Gateway Cinema opened in the Golden Gateway Center on 15 November 1967 with the Japanese film, Chushingura; it was initially operated by Edward and Roslyn Landberg who, at the time, were also operating the Cinema Guild on Telegraph Avenue and the Cinema on Shattuck Avenue in Berkeley. After two years, the location had failed to find an audience, and, in December 1970, I took it over and introduced a policy of full-time revival programming which became its trademark for the next ten years. The 1936 MGM classic, San Francisco, was a perennial favorite every April on the anniversary of the 1906 earthquake and fire, and other popular titles were such evergreens as The Thin Man, The Maltese Falcon, Casablanca, and The Adventures of Robin Hood, as well as most of the well known Alfred Hitchcock thrillers. I sold out my interests in the Gateway in March 1981, after which time the revival policy was abandoned by the new operators in favor of foreign and independent films. It was eventually taken over by Landmark Theatres, and closed its doors as a film theatre on 22 September 1996. Since that time, it has been taken over by Eureka Theatre Company and renamed the Eureka. Seating has been cut in half, a stage has been built where none existed before, and live performances are now presented.

Does anyone know if the Amazon Theater is listed here under a different name?

ken mc: The Amazon is listed as the Apollo.

Tillmany, I still have the ‘San Francisco’ t-shirt from the Gateway. My brother worked there in the late 1970’s – Ralph Osborn. Did you know him?

Thought I made a comment here so here it goes….I saw 2 films at the “Gateway”, Priest & Love & Human Remains. A nice quaint theater, though a small draw of movie goers while I was there. Glad to see the the building stayed in tact and continues on to this day.

Tillmany: Jack, I literally grew up in your theater. My parents took me to all the perennial double features as a kid (Robin Hood, San Francisco, Seven Samurai, et al), and I spent most of my teenage weekends in your theater. I still remember closing night, the secret screening of a private collector’s print of “Vertigo,” and shaking your hand and wishing you luck. I know a lot of tearful friends and customers were there for you that night. “Vertigo” was just icing on the cake.

You were one of the greats of old film revival and restoration, and won’t be forgotten.

This opened on November 15th, 1967. Grand opening ad in the photo section.