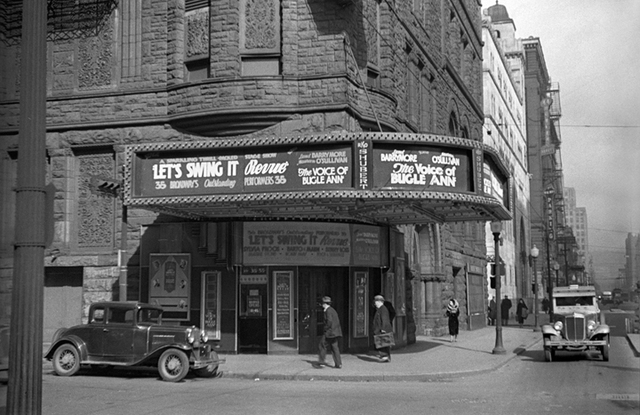 The Shubert Theater was built inside what was originally the city’s original YMCA (which opened in 1848). The theater opened on September 25, 1921 with the play “The Passing Show”. It remained a venue for legitimate theatrical performances for many years. The Shubert Theater switched to a combined use venue for movies and stage shows in 1935.

The theater was closed in 1953 and reopened as Rev. Earl Ivies' Revival Temple.

Thank you for your good words, Hank. I havenâ€™t had time to link specific Cinema Treasures' theaters to corresponding photographs yet, but I should be able to do that within the next week or two.

Your mention in an earlier post of elephants falling through to the former YMCA swimming pool suggested to me posting a couple of photographs of vaudeville elephants at the Palace Theatre in Chicago in 1937. You can see the first photograph by clicking here and the second one by clicking here. Both of the photographs were taken by George Mann of the comedy dance team, Barto & Mann.

I saw Godspell, the broadway musical at The Shubert Theatre in 1973. It was a Beautiful Theatre, it is a shame that Cincinnati does not appreciate Theater like it should. Cincinnati has destroyed the Rko Albee, The Palace Theater, the Skywalk Cinema, The Times Theatre and others.

I noticed that the Cox does not have its own listing. It seems to me that it was a substantial enough operation on its own from the Shubert that perhaps it should have a page.

When I went to see magician Harry Blackstone Jr. at the now-demolished Palace around 1980, he said that the last time he was in Cincinnati the Cox theatre was operating but was now gone. He then added that he hoped the next time he came to town he wouldn’t be performing in a parking lot.

Sadly, considering the fate of the Palace, he was not far off.

meheuck: The Cox Theatre doesn’t have a page at Cinema Treasures because it never showed movies.

My father, Ray Hall, was the one who demolished the Shubert/Cox theatres. He and Larry Trumbo were good friends. He saved a lot of materials from the job to build our home with. He had thousands of brick cleaned, marble was used in the kitchen as a breakfast bar and inlaid on 3 fireplace hearths and mantels, floor joists from the stage were used, colored concrete piece from outside of building inlaid in one fireplace in the creek rock and we have a couple of light fixtures. The house was awesome!

Side by side photos of Shubert and previously as the YMCA added courtesy of Sharyn Lee M. Shows that part of the top floor was removed when converted into the theater.

Mr. Zorning, You are correct the triangular tower was removed because of poor maintenance over the years. The Cox Theater next door to the Shubert was a memorial to George B. Cox who had been associated with the Shuberts in many theaters. The Shuberts and he owned the largest theater in the world in 1905, The Hippodrome Theater in NYC., it seated 7,000. The Cox theater was built by Mrs. Cox as a tribute to her husband George who died in 1916, the Cox theater was erected in 1921. Today, of course,the Hippodrome Th. has suffered the fate of most Cincinnati downtown theaters….it is a parking lot!

The Shubert closed after a March 23, 1975 magic stage show. The Shubert and its sister theater, the Cox, were demolished a year later.

I also saw Godspell at the Shubert Theatre in 1973 with my church group. Really good show and an absolutely beautiful venue. I remember the massive chandelier hanging in the theatre. One thing that really stuck in my mind was the lobby poster that advertised the effort to save the Union Terminal. It had an interesting by-line of “When it’s gone… it’s gone.” Anyone else remember that?