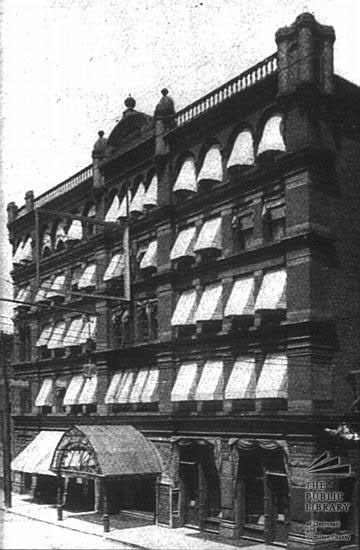 The Walnut Street Theatre was built and opened on September 26, 1892 with a performance of “Hamlet”. Designed by architectural firm Rendigs, Panzer and Martin for the First National Theatre Circuit. The construction firm was the Ohio Building & Construction Company. The first manager was Al Hyams. In April 1903 it went over to presenting burlesque as the Walnut Theatre. In 1908 it began vaudeville and was again renamed Walnut Street Theatre. Movies were soon to follow.

The Walnut Theatre was closed on May 10, 1928 with Norma Shearer in “The Latest From Paris”. It was demolished in August 1928.

Back in the late 1800s there was a Walnut Street Theatre (no specific address). Wonder if this was a replacement.

You are right about the early 1800’s date, Walnut Street Theater opened as a legitmate play live theater stage and later morphed into a movie theater about 1915 , it belonged to Uke Libson’s chain of downtown houses.

The history above does not match my research. There are bookings at the Walnut Theatre for every day in 1921 and not one news note about so much as a remodeling. It also seems a bit hard to believe that a large building housing a major new theater would be torn down just seven years later (barring a fire – which the location did not have). Yet, the facts are quite challenging due to puffery on the showmen of the day, I’d say this could be the timeline for the Walnut:

In 1891, John H. Havlin purchased the Walnut Street Hotel to build his new Walnut Street Theatre. There was likely some elements of the original structure used in the construction as the venue’s look and usage have many similarities in 1890 and 1892 renderings. Further, the entire process was short for that period taking less than nine months. Also, both 1890 and 1892 buildings were multi-story structures housing hotels and other businesses. But no questioning that in 1892, the address was now home to Havlin’s Walnut Street Theater. And it was home to the new (or renamed), Stratford Hotel – fitting for the Shakespearean offerings at the neighboring theater. The theater’s Romanesque architecture was said to have been inspired by architect Henry Hobson Richardson – though certainly not designed by him.

The Walnut Street Theater launched on September 26, 1892 with a live performance of “Hamlet.” In April of 1903, M.C. Anderson and Henry M. Ziegler of the Columbia Theater bought the building for $250,000 as their Columbia burlesque house had reached end of lease. Like Havlin, they would boast of an all-new theater and hotel construction. While there was a major interior refresh, the emergent Walnut Theater (dropping Street) certainly used liberally from the existing structure.

In 1908, the theater was under new operators, the American Vaudeville Company, who switched from burly house to refined vaudeville. This operator, too, suggested that their version of the venue was “all new.” While it had a new facade and entry, the structure borrowed liberally from the previous management’s burlesque house. This operator did return the venue to its former name of the Walnut Street Theater. Also, the hotel changed names away from the Shakespearian-centric Stratford – the theater long moving past offerings by the Bard – and to the Walnut Hotel.

As movies began to overtake vaudeville’s success in Cincy, new operator William Sullivan converted the venue to full-time photoplay house. This was its programming format until its closure. As the leasing agreement neared its expiration date in May of 1928, the Walnut was faced with three prospects: 1) movies were moving to sound which meant a costly upgrade was needed; 2) Cincinnati was getting a new breed of movie palaces designed to play motion pictures; and 3) the property values in downtown were exploding. Not built or designed for movies, the Walnut Theater’s days were numbered.

The Walnut Theater closed on May 10, 1928 with Norma Shearer in “The Latest from Paris.” It never converted to sound. Just two weeks later, the Walnut Theater and Walnut Hotel Building was purchased for an astonishing $630,000. Soon thereafter, the Cleveland Wrecking Company came in to raze the building, In August of 1928, their ad offered everything in the theater for sale including the doors and ventilation system. The theater did make the headlines one last time when the wrecking crew toppled a wall of the theater onto a nearby car lot crushing multiple cars.

And if the address of the former Walnut Street Theater seems familiar, it’s because the days of entertainment at this address returned in spectacular fashion. That’s because in October of 1995, the new-build Aronoff Center for the Arts – a live performance venue – returned live shows in the same spot as the former Walnut Street Theater. John H. Havlin would undoubtedly approve.