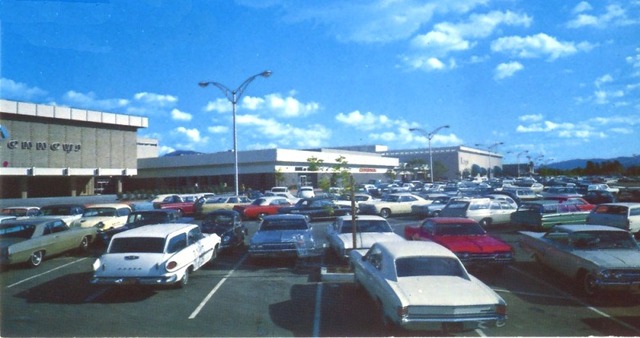 SunValley Cinema was located at the north end of the SunValley Mall in Concord, CA. It opened as a single screen cinema on August 9, 1967 with Lee Marvin in “The Dirty Dozen”. It had a small ticket booth in the main mall walkway across from the entrance to the theater. The booth had a distinctive top, dome shaped of alternating blue, white and red sheet metal panels.

The entrance to the theater was a long, wide, mottled red, carpeted stairway. The wall on the left was wood panelling with movie poster display cases. At the top of the stairs were multiple double glass doors for entrance and exit. Inside was a counter stretching toward the left with the ticket cashier station at the right end across from the entrance.

The lobby had red carpet and red couches along the wood panelled wall to the left. The decor was a bright mix of blue vinyl wall paper and white linoleum counters. The theaters were large, but sparsely decorated with fabric on the walls to deaden sound between the theaters and red fabric seats.

This theater was not an architectural marvel. It was a humble shopping mall theater where parents dropped their kids off to see a movie while they shopped. It also had a brief career showing midnight moves and “The Rocky Horror Picture Show” in addition to its standard daily fare of first run Hollywood films. It was twinned on October 22, 1976. On the expiration of its lease, the theater was demolished it to make room for more profitable tenants. I believe the space is currently occupied by a Sport Mart.

The Sun Valley Mall had a two screen theater, adjacent to an ice skating ring on the lower level next Jc Pennys. The ice ring disappeared and was nothing for a long time, while the theater fell out of favor in the early 80s. It actually showed the movie 9 to 5 for over a year! At night it was re-running Rocky Horror. Towards it’s later days, it was mainly showing kid movies. When the theater closed, the space was combined with the space for the ice ring, becoming a furniture store that barely opened, followed by Copeland’s Sports, which it remains today.

This theatre was known as the Sun Valley 1 & 2, and was part of the General Cinema (GC) chain. The cinema published a weekly flier that you could pick up at the ticket kiosk in the mall, directly across from the food court, that advertised that week’s features. This was one of the best places in the Bay Area to catch a midnight showing of Rocky Horror. Additionally, there was an outside entrance on the second level of the mall that led down a long hallway to the main lobby. This entrance was located where Houlhan’s restaurant now sits. There used to be a marquee visible from 1-680 that stood in the upper level parking lot just outside of JC Penny’s.

This theater was the first multiscreen in the area, and appeared in the late 1960s I think, long before the Festival Cinemas (Walnut Creek). Sadly, the Sun Valley was chintzy in design, as were many of the early shopping mall multiplexes. During the 1970s, every Disney movie released would play this theater.

I have great memories of this theater as a child. Especially seeing Disney films in the 1970s like Herbie and Rescuers. I can remember being with my mother, brother and sister shopping at JC Penny. My mom decided we could be unloaded at Sun Valley for a Herbie film while she shopped. Ah the days when it was safe to do that much.
I remember the long red carpet up to the snack bar and the Banister that was brass leading up the way. Oh the memories. I was greatly saddened when this theater closed. Sun Valley as I last remembered has become trashy. ce la vie.

The Sun Valley Cinema opened, with the mall, in 1965 as a single screen and remained so until the late 1970’s, when it was twinned.
I must have seen “American Graffiti” there on 26 separate paid admissions, not to mention sitting through 2 or 3 showings, then to home and play “oldies” records (the last scene in Graffiti was filmed in Concord). There was that nice, huge single 235:1 widescreen. In my opinion, it was ruined when it was twinned.

The theater closed, not because of dwindling crowds, but because management at the mall refused to renew their lease. The Sun Valley Cinema was not the only place to go; the ice skating rink, Walgreens, and all those “food eating” places across from the theater were ordered out as well.

The management of the mall wanted a more “posh” appearance, so those places were deemed not to be up to the new management’s standards.
Thus, they were out when their lease ended!

I loved this movie theater when I was younger. I remember seeing “Conan the Destoyer” and Disneys “The Black Cauldron”. I remember seeing the “Rocky Horror” at midnight too. I still remember the bright red carpeting there and the Ice Rink next door. Thats back when the mall had fun stores and things for kids to do. Every weekend I used to go to King Normans toys, Dynasty House, and then to look at the pets at Doctor X pet center next door. That place was the best!!! Now the mall is full of little wanna-be gang members, with no cool stores, and lousy food. At least the book store is still there.

I moved to the area in ‘78. I think around '81 or '82, I went with some friends to see Dawn of the Dead. Ten minutes or so in, the girls all left to watch Pink Floyd: The Wall, instead. I don’t recall ever seeing any other movies, there, though.

I remember my dad and his family came here from Massachusetts to visit the Bay Area when he was a kid, man I wished I’d seen that. Too bad it’s all not in existence anymore

The SunValley Cinema opened with one screen on August 9th, 1967, with “The Dirty Dozen”. Grand opening ad posted.