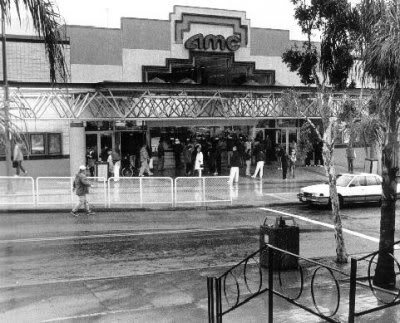 The AMC Burbank opened on December 12, 1986 as a ten-plex and was a welcome sight for Burbank’s revitalization of Downtown. Located ½ block from the main street of San Fernando Road, the theatre was one of AMC’s highest grossing theatres all the way until it was closed in 2003, replaced by the AMC Burbank 16 across the street in the former parking lot of downtown.

The theatre was one level and was expanded on December 20, 1991 to 14 screens, adding two screens to the east side of the building (these theatres sat only 150 people each and were numbered 3 and 4), and two on the west end which featured “amphitheatre seating,” a precursor to stadium seating, and a new satellite concession stand and restrooms. These two theatres sat 500 (#11) and 575 (#12) and had all the latest digital sound formats. In 2001, #12 housed a DLP Projector for Star Wars Episode 1. This first early 1990’s remodel also expanded both box offices to form one large 14 window box office.

Studios held premieres and screenings here a lot of the time since it was close to proximity with Disney, Warner Bros, Universal, and later Dreamworks. Disney, WB, and Universal had set special recognition tiles in the floor to welcome the theatre. I don’t know if these were saved or moved to the new theatre.

A second remodeling occurred in 1998 for the 10 year anniversary of the theatre that incorporated AMC’s new “pass through” concession stand.

In 2002, construction began on the Burbank Entertainment Centre, with the addition of a new 16 screen AMC. In 2003, the old AMC 14 closed permanently on June 19, 2003, moving across the former street to the new facilities. The theatre was torn down and today it is an empty lot, sans a few of the original walls of the theatre. Its future is supposed to be a parking structure addition with more shops under it.

The site of the theatre is now a condo/loft/whatever complex. If you look on the ground floor they left a few original walls near the foundation for some reason.

Theatre should be marked demolished.

“The Rocketeer” was presented at the AMC Burbank 10 in 35mm Dolby Stereo beginning on Friday June 21, 1991.