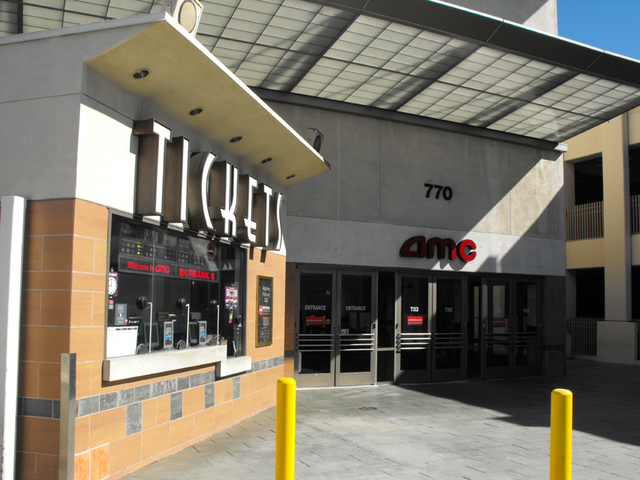 To add to the confusion, AMC has ANOTHER theatre complex (AMC Burbank 16) a few more blocks to the east/southeast at 125 E. Palm Avenue.

Just spent my entire Saturday here on 2/27 for the Part 1 of AMC’s Best Picture Showcase. Decor/layout is mid-90’s era AMC when they switched to those massive stadium seating love seats. Seats aren’t as cushiony due to wear and tear, but I made it through 5 movies in a row without discomfort.

They need to check their projection/sound equipment here. Digital sound kept dropping in and out from the 3rd film through the rest of the event.

They DO have a digital projection/3D house in here. “Avatar” looked and sounded great.

Actually, I sometimes frequent these theatres because they do have comfy seats and they were never really crowded.

I’m addicted to $6 senior Tuesday so on the evening of 4/20 I took in the movie “La Mission”. I was surprised by the unusually large attendance-then the lights went up and the movie’s star, Benjamin Bratt, strode to the front of the theater. He was very generous with his time and spent about a half hour in the lobby letting the ladies swarm him and have pictures taken with him.

the 6-plex was part of a burbank amc expansion in ‘95. the burbank mall theatre expanded from 4 screens to 8, and the 6 was built from scratch. it was originally called the 'media north 6’ to differentiate it from the nearby mall’s ‘media center 8’. the 6 opened in november 1995, and was one of the earlier stadium builds for the company. the nearby 8- and 14- screen buildings were entirely slope-floor buildings, with the exception of two amphitheaters at the 14. as the only stadium location in burbank, it was also one of the amc’s busiest theatres anywhere on a per-seat basis. the ability of the 6 to consistently sell out entire rounds of shows helped to nail the coffin in the old 14-plex, which was replaced by a stadium 16-plex in the summer of 2003. i managed here on and off for five years between 1997 and 2006, it’s still a sentimental favorite.

This is one of my favorite places to see movies. Perfect sight lines, comfortable seating and very good projection. They have excellent curved screens too and the auditoriums are not too small either. I love this movie complex!

They renovated this complex over the past year or so, and the outcome is fantastic. The 20 year old grimy seats have been replaced with recliners, but it works in these theaters. The 6 auditoriums have always been decent sizes, but they are wide enough to really make the recliners seem like it was built that way. They also replaced all speakers and the sound is awesome, and the images on the screen seem much brighter then the last time i came here. This is my new favorite place. Screens are the same size as the 16 plex one block away without those horrific crowds.

What I like about this theater is that it is not only recliners but stadium also. Many older theaters such as Cinemark NoHo and Town Center 8 went from sloped to stadium. This one was stadium already and recliners were added to it, which makes it perfect. Since they added recliners I do not frequent the AMC 16 any more. I rather be here or the 8. The 1, besides adding Prime and Dolby Cinema hasn’t been touched in decades… they need to do a big renovation there for sure!