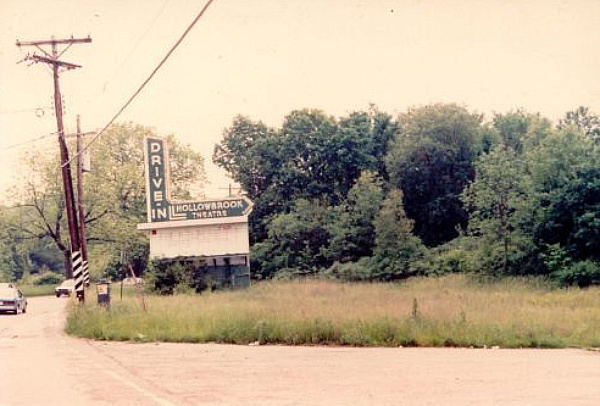 The Hollowbrook Drive-In was opened on May 26, 1950 with Bob Hope in “Where There’s Life” & Susan Hayward in “Tulsa”. This outdoor theatre was located to the south of Lake Peekskill (about 30-45 miles north of NYC) that I visited in the early-mid-1970’s. Part of the Liggett & Florin chain, it closed in 1984.

Both 700 cars and Bernie Brooks are correct facts.

Thanks Ken and Mike.

Saw the Movie “Frogs” there in 1972. I also remember the “FOGMAN” who used that DDT for pest control. What were they thinking? Also the movie “They came from within”. The long windy road at night was scary for a lad of 9.

This Hollowbrook Drive-In sign and history were on “Antiques Roadshow” this evening. Copy & paste to view.

Many fond memories of going to this place with Dad. Loved visiting Carvel across the street. Saw Prom Night, The Shining, C.H.U.D., Texas Chainsaw Massacre.. Loved walking around before it started and trying to find the best sounding window speaker. Eventually it turned to radio speaker.

The Hollowbrook Drive-In was mentioned once again on PBS-TV “Antiques Roadshow” on Mon Nov 5. There was a show poster signed by the folksinger Pete Seeger, who lived in the area. In 1949 there was a folk music concert at the drive-in featuring Pete Seeger and Paul Robeson. Both had reputations for being slightly on the Marxist side of the spectrum, so stones were thrown at them. Apparently, this resulted in a mini-riot, and Seeger wrote a note about it on the poster which he signed. I don’t recall the appraised value of the poster.

A more accurate address for this theater is 1200 Oregon Rd, Cortlandt, NY 10567. Jay Rd just east of this was the entrance road.